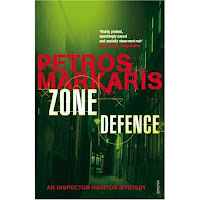 There are two "Inspector Costas Haritos" novels by Petros Markaris already published in English (Deadline in Athens, also published as Late-Night News, and Zone Defence, with a third promised soon (Che Committed Suicide). I reviewed Deadline in Athens some time ago but was slow in getting hold of Zone Defence because of the title: I assumed that football would be a big element of the plot, and I'm not that interested in sports-themed mysteries or crime novels. But Zone Defence is mostly concerned with horrible families, corrupt politicians, bribe-taking doctors, rigged opinion polls, and fraud masquerading as everyday business strategy. Football does play a role, low-level Athens teams are part of the big fraud scheme and football strategy supplies the Inspector with a scheme to protect himself from suspects, politicians, and his own boss. Two murders (which will inevitably become intertwined) call Haritos back from his island vacation: a corpse is uncovered by an earthquake on the island where the inspector's family is visiting relatives and an Athens club owner is shot outside one of his clubs. Haritos is pulled back and forth, with his boss demanding the island corpse be identified and the murderer caught but the club owner's death to be shelved as unsolved. Throughout, there is considerable comedy in the police work, the cranky Haritos's relationship with subordinates and superiors, and his family life (his wife Adriani alternates between watching reality TV and worrying the detective about his health), but also frequent references to the era of the colonels (the repressive and violent Greek junta--and if you aren't familiar with that period of Greek history, go out and rent the wonderful Costa-Gavras movie Z--and be sure to watch it straight through to the text at the end that explains that one-letter title). With all the pressures on him, it's no wonder that Haritos is irritable or that stress is taking its toll on his health. The investigation suggests organized crime, political corruption, and even a Ross-McDonald-style family drama (stick around for the end to see which is the ultimate cause of the situation, and for Haritos's very-much-in-character cliff-hanger that will pull the reader forward toward the next installment). There's a lot of back and forth on the streets of Athens, seemingly constantly jammed with traffic, and it's very much modern Greece that's portrayed here (in depth). Occasional references to early Greek history are sparked mainly by street names that honor historical figures whose lives resonate directly or indirectly with the contemporary plot and characters. (I can't figure out that cover image though...)
Posted by Glenn Harper at 8:52 AM

Hey Glenn, I just came across your blog here and truly enjoy it. I have a question for: I'm looking for recommendations for good French noir novels, but came seem to dig any up. Can you suggest anything? I'm an admirer of Melville, especially, and would like to read some books in the vein of his films.

Other readers may have other suggestions, but the best among the French noir novels I've read recently are those by Dominique Manotti, Tonino Benacquista, Fred Vargas (not really noir, more of the author's own, quirky universe), Jean-Claude Izzo (usually called "Mediterranean Noir," set in Marseilles), and perhaps darkest of all, the Algerian author (who writes in French under a pseudonym) Yasmina Khadra. Anybody else have suggestions?

Thanks Glenn, I'll look into some of your suggestions.