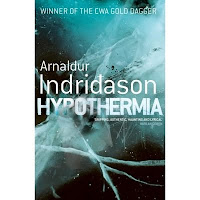 The sixth of Arnaldur Indri∂ason's Reykjavik murder mysteries to be translated from the Icelandic (this time by Victoria Cribb) is Hypothermia, a title that resonates in at least three different threads of its story. It is quite different from the others, focusing almost entirely on Erlendur, the detective and central character of all the novels, with very brief appearances by the other detectives, who are much more evident in the other books. Another difference is that, although a corpse appears at the very beginning, there is no certainty as to whether a crime has been committed (rather than a suicide) until the very end. There is no official investigation into the death of María, but Erlendur cannot let go of the case, and doggedly interviews her husband and friends, grasping at tentative threads concerning her life and her obsession with the afterlife. He is also visited by the parent of a long-missing young man and as a consequence Erlendur unofficially begins investigating several very old unsolved missing persons cases, bringing to the fore his own troubled past. He finally shares with his estranged daughter (and with us) details of the disappearance of his brother in a snowstorm (when they were very young), a tale that has haunted the whole series. And his daughter lures him into a meeting with his bitter ex-wife, in the process revealing the problem at the heart of Erlendur's marriage and divorce. As a whole, Hypothermia is a fascinating close examination of the confluence of rational versus spiritual outlooks on life, as well as the conundrums of friendship, love, marriage, and fate. The slow development of the story, plus the almost total lack of events or plot, is no detriment to the power of the book: rather, it is a consequence of the very close focus that Indri∂ason takes on Erlendur, the dead woman, and two other missing persons. Indri∂ason is at times an intensely visual storyteller, evoking the Icelandic urban and natural settings with great vividness. At other times, the story moves forward in reluctant or willing conversations between Erlendur (who has no right to conduct interrogations in this case) and the many people surrounding these non-cases, and at times in interior monologues of a particularly "arms-length" sort as Erlendur reveals a little (and slowly) of his own straitened life (both internal and social). All along, there is the overarching metaphor of hypotermia, whose relevance is immediately apparent in some cases and only made clear at the end in others, while also being a more indirect reference to the coolness of Erlendur's sometimes (though recently less so) solitary life. One virtue of the book, as a book, is that it is very difficult to imagine a film drawn from this story: there is almost no exterior action, only ruminative monologues and dialogues with portraits of the settings in which they occur. The power of the book is in the language, which is deceptively simple, rather than action. There has been considerable discussion in the blogosphere about the line between genre and literary fiction: Hypothermia is a very good book no matter which direction you approach it from (and it requires no previous acquaintance with Indri∂ason's work to appreciate it). This is the auspicious beginning to a few weeks venture into Scandinavian crime, which will include newly translated novels by Stieg Larsson (The Girl Who Kicked the Hornet's Nest), Åke Edwardson (Death Angels, actually the first of the Erik Winter novels, only now available in English), and Gunnar Staalesen, plus a few upcoming posts on Scandinavian crime TV series.
Posted by Glenn Harper at 1:29 PM

The book will be released in february here.I'm looking forward to reading it. I am in touch with the french tanslator: as far as I know Indridason is still working on these series....So, we are not thru with Erlendur