Wake Up Dead, by Roger Smith 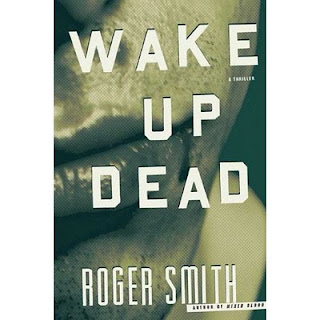 The story told in Roger Smith's new Cape Town noir novel, Wake Up Dead, is chock-full of violent acts, some casual, some sadistic, and a lot of it up close and personal. Smith provides a catalogue of the ways that characters in a crime novel might meet pain and death, from serial murder to gang violence to rape (of both male and female victims) to immolation to revenge both long-considered and of momentary impulse. A car-jacking as Joe and Roxy Palmer arrive home brings them together with the beautiful Disco and the ugly Godwyn, denizens of the Cape Flats slums on the prowl in the wealthy Cape Town suburbs. But the highjacking gives Roxy the opportunity for a life-changing act as well as bringing her on a collision course with Billy Afrika, a mercenary to whom Joe owes money (not to mention Disco's prison-loving gangter lover or rapist (depending on whose point of view), a would-be African insurgent leader, and a dirty cop determined to escape his dangerous Cape Flats beat. That's only part of the large cast, drawn from the various racial communities of the Flats (the somewhat less violent and definitely more scenic city of Cape Town only makes brief appearances here as the action spills over from the "informal settlements" and the more substantial communities still separated racially and financially from the city). The violence and the authenticity of Smith's novel remind me a bit of George Pelecanos's novels of Washington DC, but without the moral center that has become increasingly central to Pelecanos's novels. In that respect, the frequent comparisons of Smith's two novels to Elmore Leonard is more apt (and Smith shares not only the amorality but also the convincingly twisted plotting of that master of the crime novel). Wake Up Dead is one of the most violent books I've read in recent months, but also one of the most complulsively readable: Smith's style is clean and well-constructed, and his characters are convincing if not sympathetic, even when quickly sketched (inevitable with such a large cast). Smith frequently uses physical characteristics to indicate personality as well as to stitch characters into the story: the dirty cop at the center of the story is drawn as a grotesque, the tragic meth addict who has attracted the love of the imprisoned gang leader is transcendentally beautiful, Billy Afrika is covered in burn scars inflicted on him by that same gang leader in their youth in the Flats, Roxy is a former model, and so on--each character is drawn visually in vivid terms that reinforce their speech and actions, but their appearance has in each case also pushed them into their current way of life. That device is yet another way in which a crime story can be cinematic (see my previous post on Police, Adjective for more on this topic) and it's also an effective and time-honored literary device. Used poorly, it's a device that produces cliche, but used effectively, as in this case, it adds a visual and even metaphorical dimension to the characters. So, do I recommend Wake Up Dead? How violent does a book have to be for a reviewer to need to supply a warning? Are there crime novels that you've found unreadable, regardless of other virtues, if the violence is too much? And is is the responsibility of a crime novel to reflect the brutality of one of the most violent cities in the world (also one of the most beautiful)?
Posted by Glenn Harper at 9:51 AM

You pose interesting questions. If the city about which the writer is writing is, indeed, that violent, then violence is indicated. But violence for violence sake should push the book into the horror genre or just into bad writing. It seems you give this book a pass b/c of the locale and the auhtor's other great attributes--really showing us what his characters look like and feel because of those looks. I am intrigued. Great review, whether you truly like the book or not.

Excellent review Glenn. You captured everything I like about Wake Up Dead. Interesting that you brought up George Pelecanos since I found myself comparing Cape Flats to the Baltimore of The Wire which Pelecanos participated in.

Michele, the violence in Roger's books is not violence for the sake of violence. I got curious when I read Smith's first book, Mixed Blood, and did a bit of research. The gangs are as scary as Roger shows them and he has met the kind of people he writes about.

It is also interesting to remember that apartheid ended less than 20 years ago and Cape Flats is a product of apartheid. The effects of apartheid are an undercurrent to Roger's novels.

Michele: I hope I didn't give the impression of "faint praise": I really did like Wake Up Dead--I had meant to save it for my subway-on-the-way-to-work reading, but I started it over the weekend and literally couldn't put it down. But I did want to temper praise with a warning about the violence, in case other readers "didn't want to go there" so to speak.