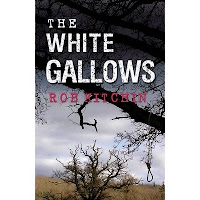 Rob Kitchin’s second novel, The White Gallows, follows Detective Superintendent Colm McEvoy through a complex series of cases following the non-resolution of the Raven case (the subject of his first novel, The Rule Book). The White Gallows is a straightforward police procedural (and not a serial-killer story like The Rule Book), told in plain, clear language in such a way as to suggest a dramatic reading (I don’t mean that the story is melodramatic but that the style is both verbal and visual, the story told largely in dialogue both face-to-face and through cell-phone conversations but also with a detailed “embodiment” in various sites among small towns, farms, and estates to the west of Dublin. The straightforwardness of the style is an effective contrast to a story that includes buried treasure, bank robbery, executions, family relations of both violent and sexual natures, and interpenetration of the present and the past. One interesting aspect of the book is its portrait of Ireland as part of Europe, both in terms of present immigration and historical links to a World War II that we (at a safe distance) might assume Ireland to have avoided. The overstressed detective, with too many cases and too few resources, is also an effective lens through which to view a post-Tiger Ireland’s economic and social stresses. The cases involve a con man preying on economically depressed populace, the murder of a very rich German immigrant who has been in Ireland since the late 1940s, an unidentified corpse found near Trim Castle, a gangland attack on a witness that turns into a full-scale war with the police, and a woman probably murdered by her husband. Plus the detective is struggling to save time for his daughter and to deal with a memorial service on the occasion of the first anniversary of his wife’s death. Kitchin handles the overload very well, though, keeping the focus on McEvoy as he bounces from one thing to another, dealing with hostile local police officials, police hierarchy, and press. This is not a thriller: there are no tense rescue scenarios or urban gunfights and only a short car chase, and not every thread is resolved at the end, adding to the sense of reality. McEvoy is not one of those super-confident cops from Hollywood, he’s constantly second-guessing his decisions, he’s frequently grasping at straws, and like Ben Devlin, Brian McGilloway’s detective from Ireland’s northwest, he frequently goes too far, making impulsive decisions and angering powerful people. But he is persistent, and if anything too dedicated to his job (a lot of his second-guessing has to do with the job’s absorption of his time to his family’s detriment). A good procedural isn’t about guessing the solution to a mystery, it’s about piecing things together bit by bit until the truth of the story emerges. In The White Gallows the truths are those of family, money, and history, universals that are in this case well grounded in Irish and European realities of past and present.
Posted by Glenn Harper at 11:02 AM

Hi Glenn, thanks for the thoughtful review. Much appreciated.