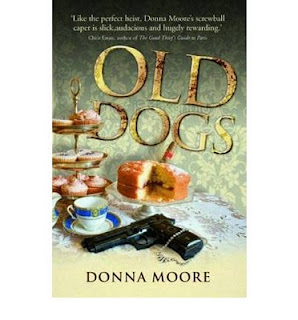 It's difficult to talk about the plot of Donna Moore's Old Dogs without spoiling some of the pleasures of discovery (and I would recommend not reading any reviews or cover blurbs in advance, if at all possible). This is a farce (from the French word for "stuffed")--not a satire because there's not really a moral to the tale, not a parody though there is plenty of reference to old standards of the crime gere--and the plot is indeed overstuffed with a motley crew of thieves, monks, cops, and pompous bureaucrats circling around a pair of ancient golden Shih Tzu dogs that are about to go on display in a Glasgow museum. All of the action points toward the trainwreck of heist attempts, but Moore gives us much more, continuing the action (and the fun) long after the heist itself (she even saves a final fillip for the last page). Suffice it to say that there are twists and turns a-plenty and all the characters, from the most unsympathetic ned (see Moore's blog for a very funny definition of that term) to the most sympathetic heroine (heroines, really, and there are quite a few) bear the ups and downs of the furious plot. 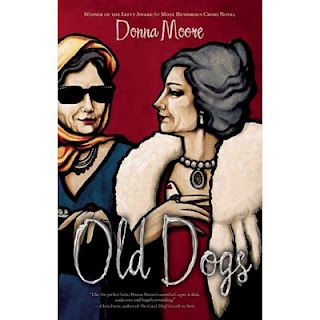 Her method is more related to the French farce than to the Dortmunder novels of Donald Westlake (which are very funny but center on a single character and his cohorts); Old Dogs does perhaps take sides among all the characters, but each of them gets his or her due, in one way or another, in terms of "face time" within the story. The book is very funny, as anyone would expect if they've been following Moore's blog, Big Beat from Badsville (see here), one of the most enjoyable crime fiction blogs. I need to go back and get a copy of her other book, Go to Helena Handbasket now. There are two covers for Old Dogs, from U.K. and U.S.--neither really captures the manic energy of the book but each in its own way suggests an aspect or two of the story. I think I like the (as yet unreleased) American version better graphically, but the suggestive combination of tea and semi-automatic on the U.K. version is definitely a funnier visual! Old Dogs is not just for crime fiction fans, but the afficianados of the heist story (in film and fiction) and other subdivisions of mystery/thriller writing will be especially rewarded by the tale.
Posted by Glenn Harper at 12:06 PM

Very well reviewed.
Basically the message is to 'go out and buy it'.

One Man's Opinion. Old Dogs by Donna Moore: http://tinyurl.com/36ffkot
No fleas on this one.

Thank you for your lovely review - very much appreciated. I'm chuffed that you enjoyed it. French farce...I like that :o)