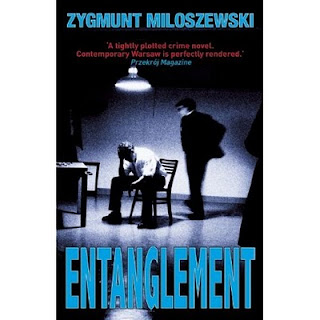 Zygmunt Miloszewski's Entanglement, translated by Antonia Lloyd-Jones and published by Bitter Lemon Press, is part procedural, part puzzle, part secret-police intrigue, and in the end, a coherent whole that's funny, engaging, and even profound. There are multiple references to crime fiction from Europe and America, and the denouement proceeds in part with a clever and original take on the classic "get-them-all-in-a-room-and-see-what-happens" scenario à la the classic country-house stories or Simenon's Maigret books. The story mostly follows Prosecutor Teodor Szacki as he struggles to unravel a case that resembles the "locked room" mystery in some ways: a man is murdered during a weekend group therapy session in a monastery/retreat in Warsaw, found with a skewer piercing his eye and brain. As Szacki struggles with a surfeit of suspects and a paucity of evidence, we get to witness a fully rounded character in a difficult situation: Szacki reads crime fiction, plays computer games, loves his wife and daughter but is sorely tempted by a young reporter, struggles with his reluctant police colleague and his superior (who's more human and complex than many bosses in police procedurals), and exhibits a lot of humor as well as angst. Occasionally we glimpse the scene through the eyes of a mysterious and almost omniscient older man whose ghostly presence becomes more and more important as the story shifts from straight murder mystery to political thriller and back again. And Szacki ends up in the midst of several existential dilemmas, faced with threats to his professionalism, his family, and his sense of self. If the story moves slowly in the early stages, with Szacki's interviews of the therapy group and his investigation into the therapist's unorthodox methods (as well as other cases he has to deal with), the comedy in the prosecutor's comments and observations keeps the tone light and engaging and as the pressure accumulates the story's hold on the reader tightens. When the resolution comes, as Szacki reconvenes the therapy group in a very theatrical way, everything becomes quickly clear, and then gets muddied again. Szacki remains unsure of his situation and his case up to the last sentence and (I hope) into further installmenets of Miloszewski's series yet to be translated. There is, by the way, a diagonal cross through the "l" in Miloszewski that I can't reproduce with my keyboard. My previous encounters with Polish fiction are with Przybyszewski, Witkiewicz, Bruno Schulz, Gombrowicz, and Kosinski (whose Painted Bird includes an assault on an eye even more viscerally disturbing that the one in Entanglement): each with a particular strain of decadence, oddness, and philosophy that can at least be seen in some overtones in Miloszewski's novel--but Miloszewski refers to crime writers rather than those Polish authors and his emphasis in the end is on more recent Polish history and on contemporary Polish life and balances lightness and depression very well in the prosecutor's character and his story. I wish I could figure out how to pronounce some of the names in the story, though--I wouldn't want a pronouncing dictionary to be included in the text, but it's still distracting to keep running over all those names with no sense of how they should sound--my loss or my fault, I guess (and I'm guessing that Szacki is pronounced something like Shotski--anybody know?).
Posted by Glenn Harper at 11:00 AM

Thanks, Glenn, yet another recommendation of yours that is going on my list (complex names notwithstanding!).
Have you seen the recent Euro Crime blog post inviting readers' shortlists for the International Dagger this year? I'd be intrigued to know your 6 favourites from the 61 eligible.

Anglo dumbass don't get shit that ain't inb his alley. It ll come back to your stinkin' ass with a vengeanc"e some day.

Thierry's comment (if it is genuinely a comment from him and not some hack/virus/worm spreading around the blogosphere) injects a genuine noir element into the discussion, though I have no idea what he (or whoever) is referring to...

It is bizarre, isn't it, Glenn?
Just dropped back to say I've finished the book now - I loved it. Thanks so much for the great review which encouraged me to buy/read the book.
I can't reproduce the slash in the l either, using Word - it isn't an option in special characters. Maybe Polish characters aren't considered universal enough to be included in standard alphabet fonts, pity.

Hi, stumbled upon your review by a pure chance. Please let me know if you need any help with names pronunciation, I am Polish, so should be able to help! Glad you liked the book, btw.

I just finished reading this book - in czech, I turned the last page at 3am. I wish we had some czech Milioszewski --- I already know the old Erben's and Velinsky's books by heart. Strange thing - Entanglement reminds me a lot the old swedish stuff - Wahlöö/ Sjöwall.
Worth buying and definitely worth reading!