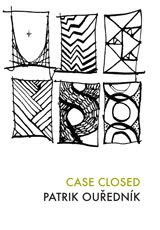 Case Closed is a delightful and puzzling short novel (143 page in the English translation by Alex Zucker, published by Dalkey Archive) by Patrik Ourednik (I can't reproduce the Czech orthography--see the cover pasted in here for the proper spelling of his name). In a normally quiet police precinct in Prage, there is rash of crimes: a 40-year-old murder, two fires in a retiree's apartment, a rape, and a rash of graffiti, all being investigated by Inspector Vilém Lebeda and a couple of other detectives. The subject of the novel, though, is really post-Communist Prague in the 21st century--and for that reason (and through the similarity of some of the crimes) Case Closed has some common ground with a Polish novel recently reviewed here, Zygmunt Miłoszewski's Entanglement. Though both of them use the conventions of crime fiction with considerable satirical and playful intent, Ourednik stretches the norms quite a big further. His unnamed narrator sometimes addresses the reader about the book in his/her hands, and the short chapters jump around from one character and story line somewhat capriciously. Ourednik's narrator also addresses, with bitter comedy, the current state of Prague society and culture more directly than does Miłoszewski.

But don't think that Case Closed is dry literary matter that simply purloins the forms of crime fiction (the sort of thing we've seen repeatedly in recent decaded). Instead, Ourednik's novel is light, funny, and involving. Frequently a plot element is taken up and dropped, so that we the readers know more than either party in a police interrogation (and we might be provoked to shout at the detective to get to the point). Numerous dangerous situations turn out to be dreams on the part of a traveler whose biography we know (including mysterious links to Inspector Lebeda).

The story begins with a dyspeptic retiree, Viktor Dyk, on a park bench who deliberately misdirects a young woman who asks him where the Academy of Fine Arts is located, with ill consequences. Then another retiree tells Dyk that a woman they know has been killed, run over by a car. The meandering conversations (hysterically funny) among the old folks on the bench, and their subsequent thoughts as they go on their way are a substantial part of the narrative. Chapter 8 (of the 40 short chapters) introduces the unique detective, whose personality is at least as much the focus as his investigations. His idealistic childhood and subsequent disappointments have left him no less idealistic but far less prone to speak about it to anyone.

Lebeda is one of the most likable and perhaps also one of the most unsuccessful of literary detectives. And Case Closed twists the detective genre like a wet dishrag. The book is an excellent "vacation" from more realistic, straightforward crime fiction, and reading it will give some perspective on the form as well as a different approach to social criticism, comedy, crime, old age, and any number of topics that are genuine grist for the noir mill.
Posted by Glenn Harper at 10:58 AM

I wonder where do you get such amazing books. Thanks for sharing it.

looking forward to reading this. i read "all this belongs to me" that was also translated by alex zucker. he did a great job on that one. i think the translation has a lot to do with the readability of a book. good review.