The English title of this recently translated 1997 novel by Pierre Siniac (winner of the Grand Prix de Littérature Policière in 1981) is The Collaborators, which plays on various elements of the plot, including literary collaboration, conspiracy, and the World War II Collaborators with the Vichy government, a continuing scandal (perhaps at t his point even a scandal-cliché) in France. In French, the title is Ferdinaud Céline, a character's name and also a reference to the nearly obsessive repetition of references to the famous author Ferdinand Céline, a pardoned collaborator. The Collaborators is a "deconstruction" or even a parody of both crime fiction and the French literary world, a difficult kind of thing to keep up in what is a rather long novel(489 pages in the translation).

But I found myself entrapped, fascinated first by the ridiculous situations and characters and then by the slow development of the crime plot. At the beginning, a homeless drifter and his co-author, a former butcher and publisher, are being interviewed on TV on the occasion of the spectacular success of their recently published novel. On the way home from the interview, the 2 authors begin to argue, and we learn that only one is really the author, Dochin (the drifter), and that the fraudulent co-author has some undisclosed hold over the true author. The story then reverts to the past, showing Dochin years earlier looking for a place to stay in rural France. He is repeatedly turned away from hotels who don't like his appearance (an ongoing theme in the book) and is taken in by the patroness (Ferdinaud Céline) of a motel catering to outcasts and freaks.

From here on, the major theme of the book is that Dochin is convinced that the novel he is writing is crap, without any style, interest, or value, while Ferdinaud and ultimately two Parisian publishers tell him again and again that it's a masterpiece, the equivalent of Louis-Ferdinand Céline's sudden appearance on the literary scene with Journey to the End of the Night. The reader knows something is going on beneath the surface, and when one of the publishers engineers a murder 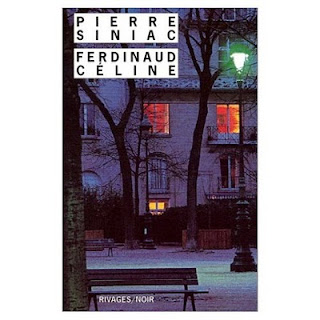 we think we know at least part of the secret. Then when the novel is about to be published and the "ARC"'s have been sent out, critics who announce their dislike for the book begin dying in mysterious circumstances: and we the readers begin to get some more ideas about what's going on. But when the revelations finally come, we are thrust back to the beginning, forced to reconsider everything we've been living through in our reading.

The structure of the book is a blend of literary comedy and crime thriller, tilted for a long time in the direction of the literary half of that blend--perhaps too long for some crime fiction fans. There are some Anglophone crime novels that have a similar combination of literary comedy and noir thriller (from Charles Willeford's Burnt Orange Heresy to Wyndham Lewis's Lavender-Hill-Mob-like Mrs. Duke's Million). If you know a bit about French cultural life and literary history, The Collaborators is not only a lot of fun but expands the glimpse into French crime fiction that expand our view of that field beyond what we in the English-speaking/non-Francophone world have hitherto had access to.

The Collaborators was published in Jordan Stump's lucid translation by Dalkey Archive Press, which specializes in literature from around the world that is a bit off-center and frequently comic (the name of the press is taken from the work of Flann O'Brien). Another Dalkey Archive book that verges on crime fiction, from the Czech Republic, is next on my reading list.
Posted by Glenn Harper at 3:25 PM

Your review brings to mind a true crime non-fiction work by A. Louise Staman titled 'With the stroke of a pen' which details the circumstances surrounding the murder of Robert DeNoel who prior to WWII built the DeNoel publishing house up to being a major rival of both the Hatchette and Gallimard publishing houses--the largest in France. Staman's books is as much about the rivalry between these publishers as it is about the collaboration not only of authors but the publishers too in their eternal struggle to destroy each other and all kinds of machinations used after the liberation to appear squeaky clean. Celine, of course, is a major in her book--he is also one of the major novelists of the 20th century--arguably literature's darkest figure.