Per Wahlöö, as I said in the previous post, can hardly be called a forgotten writer, since the 10 Martin Beck novels he co-authored with Maj Sjöwall continue to be held high in the crime pantheon, but all five of his solo novels are now out of print in English and seldom referred to in surveys of Swedish or international crime fiction (outside Sweden anyway).

The Steel Spring is a dystopia-nightmare (and ultimately a zombie/vampire story), but one thoroughly anchored in social realities and in Wahlöö's political ideals. The Steel Spring also shares some common ground with Stieg Larsson, not only for its politics (and for the often direct political diatribes attributed to the characters) but also for the similar portraits of a secret-police shadow government. The real subject of the book, though, is false consciousness: the population's failure to recognize the true power behind the supposedly benign nanny government that has taken over. The elements of this society that were portrayed as the background to The Thirty-First Floor become the main plot elements of The Steel Spring: 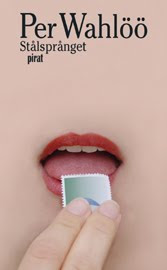 the government is adding an aversion drug to the alcohol that it sells, in order to discourage drunkenness (practically the only crime still being committed), and is also planning a sham election designed mostly to create social solidarity. Jensen (who is sick throughout Thirty-First Floor) goes out of the country for a liver transplant (in a country that seems to be in the Middle East) and when he returns, something has gone badly awry. What's left of the government sends him into the capital to find the truth about a disease that has ravaged the country, bringing first chaos and then ghostly, apocalyptic silence. His investigation is a grim portrait of social engineering, authoritarianism, fear, and the "after death" stage of the disease.
Posted by Glenn Harper at 9:31 AM