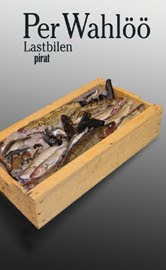 Continuing the focus on Per Wahlöö for forgotten friday this week, here is post 3 of 4 (the final one tomorrow). See yesterday for the first two books I'm reviewing this week. Two of the other three novels by Wahlöö that have been translated into English have a Hispanic theme, one set in Spain (the author was deported from Spain in the Franco years) and the other an unnamed in Latin American country. The fifth is The Generals (1965), a trial novel--in fact a trial transcript, entirely in dialogue, of a kangaroo court or show trial in a post-coup island nation, once a paradise and now a totalitarian state. The novel deals with torture, personified by the defendant’s deterioration, with horror and dark humor: he ultimately is in a coma, though still present in the courtroom.

The earliest of his translated novels is The Lorry (1962), published in the U.S. as A Necessary Action, which takes place in a port town and a small hill village on the Catalonian coast of Spain, in the first decades after World War II. This and Wahlöö's next book, The Assignment (1963), are more realistic novels than the Jensen books, and The Lorry shares two characteristics with the Martin Beck stories: Long sections (perhaps the most interesting parts of the book) depict the interrogation of a German painter by a Spanish civil guard sergeant; and Wahlöö's tendency to refer in the narration to characters by their whole name rather than part of it (the German, Willi Mohr is always Willi Mohr, never Willi or Mohr, just as Martin Beck is always Martin Beck).

The elements of The Lorry gradually become clear in the interrogations and the narration of Mohr's life in Spain, including the murders of a Norwegian couple with whom Mohr had been living and of a local fisherman, the bloody suppression of a miners' strike and a related resistance movement, and Mohr's intermittent pursuit of the Norwegians' killers. The book is skillfully constructed and very "noir," to the extent that none of the characters is likable, and (fair warning) there's some casually depicted animal cruelty. The overall point seems to be the distortion of character and society under a Fascist state's dominance, and overall it’s reminiscent of a number of other dark and pessimistic portraits of Franco-era Spain.
Posted by Glenn Harper at 4:36 AM