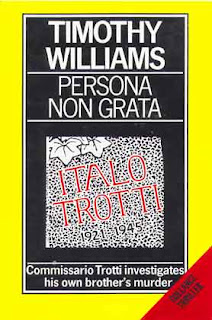 Timothy Williams's third Commissario Piero Trotti novel was called Persona Non Grata in the U.K. edition and The White Audi in the U.S. (continuing the trend of the U.K. publisher going with the author's title, one that has something intrinsic to do with the story, and the U.S. publisher plucking out an automobile incidental to the plot as a "hook" for the series). Once again, the taciturn and somber detective is portrayed in an almost kaleidoscopic fashion, in dialogue among characters who are talking past, rather than to, one another and in terse but elegant narrative that moves forward in slanting leaps rather than pedantic plods.

The 11-year-old daughter of Trotti's former driver (when both were stationed in Bari) has been attacked with a knife while she slept, and her father (now a taxi driver) gives a description (based on a glimpse of the fleeing assailant) that seems to match her older sister's boyfriend.

But other things are going on simultaneously: an abandoned newborn is discovered, after the mother shows up at the hospital in distress, and a priest appraches Trotti about murders related to Trotti's own brother's death during the fighting between Fascists and Partisans in the '40s.

Trotti is assisted now not only by the long-suffering Pisanelli (who has advanced in the ranks and doesn't actually work for Trotti now) and his new driver and assistant, a female officer who gives Trotti as good as she gets in the dyspeptic interchanges typical of his relations with his subordinates (and even superiors, witnesses, and everyone else). There is a pattern in Trotti's relationships with women that deepends as the series goes along (his wife is now completely absent, and his daughter is studying in Bologna). 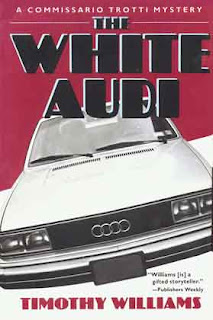 There is a sadness in the book that goes beyond Trotti's usual melancholy (for reasons I won't go into), and the social background here is Fascism (as the Moro kidnapping lay underneath the story of the first Trotti book and the "years of lead" did the same in the second). Trotti has become "persona non grata" even in his own department by the end, but it is his insight and persistence that draws the elements of the plot into a conclusion that isn't quite justice but is, for all that, reflective of the critical eye that Williams casts on the Italian social landscape.

Highly recommended, as with the first two in the series, and I'm currently reading the fourth (Black August, for which there was no U.S. publisher, hence no automotive title), which is just as good.
Posted by Glenn Harper at 10:50 AM

Is the author Italian? That is, are these novels translated? It is just that his name does not sound exactly Italian. The books sound great, though, thanks for identifying yet another author who seems to be a must-read for me.....

Maxine: He's English, almost exactly the same age as Dibdin and Nabb, and started publishing at about the same time as those two. He's now writing crime novels in French, set in Guadaloupe, none translated so far.
thanks,
Glenn

p.s.: Williams lived in Pavia for some time, the small city near Milan where the novels are (more or less) set. So he has the same sort of intimacy with the setting as Donna Leon (another age-cohort who started publishing at about that same time).

Thanks for the kind words, Glenn !

There are three West Indian novels with the investigative magistrate, Anne Marie Laveaud.

and I am at work on the fourth.

All are in English but the first - 97-1, after the zip code for Guadeloupe - is being published in Paris by Rivages in April 2011. I did the translation. It is the tale of an old man who returns to Guadeloupe after being sent to the penal colony in French Guyana. Soon after his return to Guadeloupe, he is accused of killing a wealthy Creole planter who has stolen his land.

I have the English language rights to all three novels so if you know of a publisher ...

Got it late. I am getting behind myself.

Hey, guys, I am totally gobsmacked.

The London Observer has put me among the ten best European crime novelists.

All I need now is a publisher.