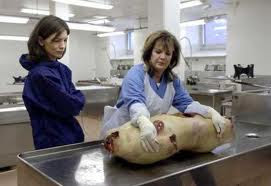 The first film in the Swedish TV series based on the Irene Huss novels of Helene Tursten is The Torso (The Tattooed Torso in the original Swedish, apparently). The first book in the series, Den krossade tanghästen or, in the English version, Detective Inspector Huss, was filmed out of order: not sure whether the film people wanted the more sensationalist story of The Torso as a lead-in, or perhaps the "tattoo" links to a certain other tattoo of international fame.

The film is in some ways a rather typical cop show, with a villain stalking the investigators and ultimately threatening the detective's family. But the factors that make the books interesting also apply to the film: Irene is not a gloomy alcoholic, she's a happily married (to a chef) professional. The police team is actually almost (but not quite) gender balanced, with three women important to the series (I wonder whether that's typical of the actual police situation--the various books and films lead us to believe there are senior cops more prominent in Sweden than elsewhere).

It has been a couple of years since I read The Torso, but the film captures the characters and scenes very much as I had imagined them. The actor playing Huss, Angela Kovacs, is not quite how I had pictured the detective, but (once having seen her in the role) she becomes Irene in much the same way that Luca Zingaretti has become Commissario Montalbano for those who have seen that excellent Italian conversion of books into TV films.

There are 6 Irene Huss films that have made it into circulation with English subtitles, three taken from the books that have been translated. So one of the virtues of the DVDs is that three of the untranslated books are available in film translations rather than language translations, since apparently SoHo Press is not translating any more of Tursten's books. Perhaps the availability of the films (and the link to that other tattoo, as well as to the film company that filmed THAT series) will encourage SoHo or someone else to get moving on Tursten translations. It's one of the best of the Scandinavian series, not least because Irene is so normal (rather than tortured or spectacularly flawed).
Posted by Glenn Harper at 8:59 AM

Hi Glenn,
Actually, we (Soho) will be publishing some more Tursten in the near future. Will let you know once the i's are crossed and t's are dotted. But we are excited, and have just reprinted two of the earlier novels in our new paperback jacket style (hip and fresh!).

Oh yes, brilliant news. I loved the first three (luckily Soho's US editions are available over here in the UK) so I am very pleased to read this. She's never been published by a UK publisher, more is the pity.

I have some of these DVDs thanks to a kind person who was in Sweden over the summer, where you can pick them up cheap, so will be viewing this and the others when I get the time (in about 30 years).

I am so glad to see this. I have enjoyed the Irene Huss series and am looking forward to more books featuring her character.

But, I am so envious of her coming home to gourmet dinners prepared by her chef spouse. The descriptions of the meals are too tempting.