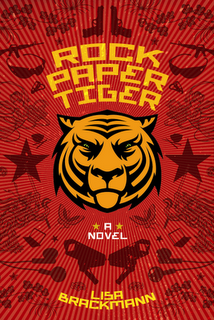 Rock Paper Tiger, by Lisa Brackmann, is more of a thriller than a crime novel. There are probably or likely murders, but no corpses; lots of violence and many threats, but not much effort to solve a mystery. What it reminded me of in an odd way is a wonderful book from the 1960s, Lionel Davidson's The Rose of Tibet. The Rose of Tibet was much praised when first published and has been revived from time to time, but it's still worth reminding people about a book that is in part a throwback to the great adventure novels of previous centuries, updated to the 20th century's global politics.

First, Rock Paper Tiger: the story revolves around Ellie Cooper, an Iraq-war veteran and former medic who saw a few too many things during the war that now threaten her psychological balance, her marriage (to another Iraq vet), and even personal safety. She finds herself adrift in Beijing, having left her husband, sent there by a security company (sort of a small-scale Blackwater). He found a Chinese girlfriend and she left him, having already left the Christianity that was (besides the war) about all they had in common.

Ellie has fallen in with some fringe groups she drifted into while studying Chinese: some Internet role-game-players and some artists, in particular. On a visit to an artists' compound (a vivid glimpse into the overheated world of Chinese contemporary art and its conflicts with a suspicious and paranoid government) she briefly meets a Uighur who may be a freedom fighter or a terrorist (depending on your point of view) who is apparently on the run. Then her artist friend disappears. Then she's invited into the different but possibly overlapping worlds of art collectors and game players, while simultaneously being pursued by various threatening groups (sometimes hard to tell apart) from various governments and interest groups, all of whom want something from her (it's not too clear exactly what) and all of whom are willing to exert violent force to get it. 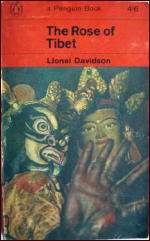 What ensues is a wild ride back and forth across the new China, with glimpses of the old China. It's in these sections that the resemblance to The Rose of Tibet occurred to me: in that book, an Englishman who had come to Tibet to look for a missing brother is thrust into the role of protector for a young boy and a beautiful woman, with whom he travels in haste across the mountains, with the Chinese army in hot pursuit (it's during the Red Army's invasion of Tibet). Davidson's story is marvelous, a wild, sometimes funny, sometimes erotic, sometimes even spirtual quest or flight that never lets up. Don't listen to me, go read it. Graham Greene meets H. Rider Haggard, as reviewers have remarked. Or Eric Ambler (another writer unjustly gathering dust) meets Edgar Rice Burroughs. There's nothing quite like it (even among Davidson's other, in different ways also excellent, books. It would have made a great movie, if anyone managed to do it right, though it's probably impossible to do it now (special effects would kill the story).

Brackman's novel is almost as intense, a good trick given how vague the threats to her and the goal she is supposedly seeking are. the book has a bit of a cyber-punk edge (in the gaming and its devotees) as well as some serious consideration of the extent to which both repressive and supposedly democratic governments will go in the era of globalized terror and global paranoia. I enjoyed the story and its propulsive motion, and also felt a not-unpleasurable sense of having been conned, when the threats against Ellie more or less evaporate. The real point of the story, I suppose, is Ellie's growth, her shift from a passivity that even predates her PTSD war experience. Her voice is paramount, and Brackman's chief achievement is that the reader never doubts her and remains interested in her and in her voice.
Posted by Glenn Harper at 10:47 AM