Manuel Vazquez Montalban at the movies 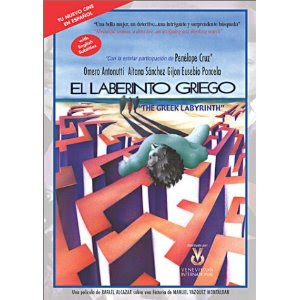 Last weekend, I watched the only film version of one of Manuel Vazquez Montalban's Pepe Carvalho novels that I've been able to find with English subtitles, Rafael Alcazar's 1993 film El Labirinto Griego (The Greek Labyrinth, taken from the novel published by Serpent's Tail in English translation as An Olympic Death). There are several other movies and at least two TV series based on private detective Pepe Carvalho and on Vazquez Montalban's novels, but all made for a Spanish audience and not available with subtitles.

But oddly, for El Labirinto Griego, even though Vazquez Montalban was involved in the screenplay, the character's name was changed from Pepe Carvalho to Juan Bardón, and certain other facts about the novel and the life of the detective are changed (plus several of the more colorful running characters are left out). Does anyone know why the name was changed? Copyright problems, given the other film and TV companies that have bought the rights to the Carvalho books? There's also not much about food in the movie, a big departure from the books.

In any case, An Olympic Death/Greek Labyrinth is a somewhat odd book turned into an even odder movie. The plot twists and turns without much logic, leading the detective on a merry chase through a Barcelona that is being transformed by the upcoming Olympic Games (and not for the better, to listen to the detective and other Barcelona natives in the story): In particular, Pueblo Nuevo/Poble Nou (correct me if I have the name or spelling wrong, please), a working class and industrial neighborhood being razed to build the dormitories for the teams. Along the way, the detective and his clients are threatened and the detective is in trouble with the police.

The plot is loosely wound around a man and woman from Paris who hire the detective to find her husband, a Greek painter and artist's model who has run off with a new lover. She keeps justifying her search by saying he is the "man of my life," the title of another book in the series (a much later one). Bardón/Carvalho leads this pair through a tour of Barcelona at night at this specific time in history, visiting a decadent artist's party, a few bars, a warehouse where a couple of theatrical events for the Olympics is being rehearsed, and an abandoned warehouse where the painter has been living. There are a few surprises when the painter is finally found (a bit predictable, though, and tied to the time of the writing and filming), but mostly the story hinges on the emotional experiences of the characters, the detective included. His daughter (I don't remember a daughter from the book, but someone can perhaps let us know if that's a character invented for the movie) is played by a very young Penelope Cruz (her first film, at least that's what's reported in the film's reviews), and the style of filmmaking is visual rather than narrative (sometimes to the point of annoyance, in my opinion, sapping some of the narrative motion). I thought the actors were well chosen, though (even the Galician/Catalan detective is actually played by an Italian).

But this is the one we have if we don't speak Spanish. I'd love to see the TV series (one from the '80s, I think, and one from the '90s, and there are perhaps others), if anyone has a source for subtitled version or can encourage the distributors to subtitle and release them. Some basis for comparing the Laberinto film to the other versions of Pepe Carvalho would be very interesting.
Posted by Glenn Harper at 10:48 AM

Glenn, Sorry this is a comment. I am promoting a Mexican police novel that I would like you to review. If you're interested, email me. Either way, go ahead and delete this. pglaurence at santaclarapublishing dot com

Glenn I have no idea why the character's name was change from Carvalho to Bardón and you are right,there is no daughter in the book. The film is known in Spain only because this was Penelope Cruz first film.

There are some guys in Sweden who can help you find the TV series with subtitles -- if you know what I mean and I think you do.