Frode Grytten's The Shadow in the River, part 1 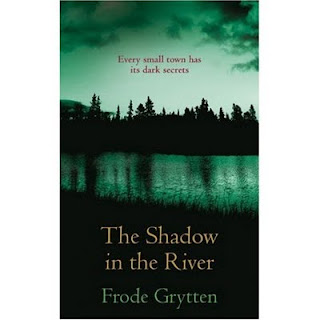 Split my review of a short book into two parts might seem odd, but this is an odd book in some ways. The reviews I'd read of The Shadow in the River (translated from Frode Grytten's Norwegian by Robert Ferguson) mostly emphasized the dark and grim qualities of the book; to be honest, it didn't seem very inviting, and it was pretty expensive every time I looked for it, so I forgot about it. Recently I noticed an ex-library copy on-line that was cheap enough to give it a try.

The beginning is indeed a bit dark and grim, concerned with a reporter, the discovery of a body in the river, and small town pettiness, and the style is clipped and indirect, not pursuing the crime so much as portraying the reporter in his own voice. But once it gets going, the book has a lot of bitter humor. Especially toward the middle, where I am now in my rapid progress through the book, with the swarm of national newspapers descending upon the small, decaying, formerly industrial town of Odda, the comedy is quite broad, though still dark (almost Evelyn Waugh-like in tone, and Waugh, too, took on the press).

The humor reminded me of a line repeated a few times in Jan Costin Wagner's The Winter of the Lions, not a book (or a series) much noted for its humor (though th odd sense of humor of somoe of the characters is referred to occasionally). In a book whose characters are called Kimmo Joentaa, Ari Pekka Sorajärva, Tuomas Heinonen, Kai-Petteri Hämäläinen, etc., every time the name of an emergency-room doctor is mentioned, Valtteri Muksanen, some one says "Funny sort of name" or something like that. Does anyone recognize if that's a joke (to a German or Finnish reader)?

More about the plot of The Shadow in the River soon.
Posted by Glenn Harper at 7:20 AM

Unknown said...
This comment has been removed by a blog administrator.
10:08 AM

I don't know the answer to your question, but I do find as a non-Finnish reader, retaining all the "funny names" in Jan Costin Wagner or the Helsinki Homicide books is jolly hard compared with other countries! Mind you, I am glad that the publisher has not gone the dumbing down route eg used in translating "Adam" Stubo's name in the Anne Holt (also Norwegian, as Grytten) novels - I forget the man's name in the originals but it certainly is not "Adam"!