The Fatal Touch, by Conor Fitzgerald 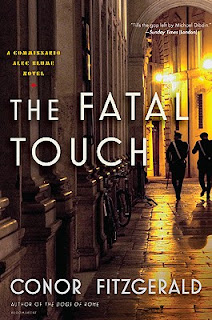 The Fatal Touch is the second crime novel set in Rome, by Irish writer Conor Fitzgerald, featuring an American detective in the Italian police. International enough? Someone is mugging tourists, and in the midst of that investigation, the body of an old man is discovered on the street, perhaps murdered. He turns out to be an Irishman known for art forgery and a partner in a dodgy art gallery. Alec Blume, the lead character in the series, is mentoring a woman recently transfered into his department, and her relationship with the other members of the team isn't going very well. On the other hand, Blume is inept in his dealings with everyone, from witnesses to cops to friends.

In fact, Blume is the most difficult personality in Italian-set crime fiction since Timothy Williams's irascible Commissario Trotti, and as in Williams's novels, Blume's character sets the tone. The story is complicated, with frequent digressions into the forger's story as revealed in his journal. Those digressions are in a way a separate story, going back to the old man's youth in Ireland: some readers find the alternate narrative engrossing—to me they were interesting but distracting from the main story, making the book seem longer than it needed to be.

But the plot intricately intertwines this backstory with several threads in the here-and-now, without resorting to cliche in bringing the story toward a coherent conclusion. Fitzgerald is not afraid to deal harshly with some of the series's more interesting characters, a trait he also shares with Williams (whose characters frequently move away from the unnamed setting of the series or get killed). There's also a vivid villain in the novel, in the person of a corrupt and ruthless Carabinieri Colonel who takes over the investigation from Blume and lurks behind everything that happens in the story from that point on.

The spiky central character, eccentric plotting, and the capacity to let bad things happen to good people give the Blume books an authenticity and immediacy that a more reticent writer might not achieve. And the Roman milieu is vividly evoked here, perhaps even more so than in The Dogs of Rome, the first in the series. Plus the reader learns in the new book a lot of fascinating information about the trade of art forgery.
Posted by Glenn Harper at 1:37 PM