A Vine in the Blood, Leighton Gage 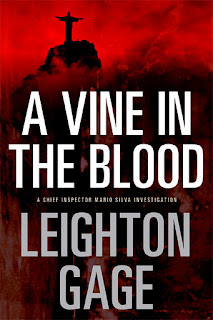 The fifth Mario Silva novel by Leighton Gage is a cracker. Each of his books takes on a different segment of Brazilian society, and in this case it's a middle class enclave inhabited by sports stars and lesser humans as well.

I'm not a fan of football/futbol/soccer, and the fact that A Vine in the Blood is based on the kidnapping of a football hero's mother (apparently to put him off his game just before a World Cup prelim match against arch-rival Argentina) gave me a little pause--but I needn't have worried. The book is in part about the social phenomenon of football, but not really about the game (in the same way that Vazquez-Montalban's olympic book isn't really about the Olympics).

Silva's crew is pressured on all sides to find the mother before the kidnappers kill her. The kidnappers aren't revealed until the end, but when the plot is finally detailed, it's a heist-story in itself (I can't reveal any details). There's only a brief glimpse of the kidnapped mother in captivity, and the rest of the story is with the cops, chasing one false lead after another.

When the final break comes, it's a perfectly believable insight rather than the strained coincidence that we sometimes see in crime fiction. All in all, the Silva series just gets better and better.
Posted by Glenn Harper at 6:54 PM

This certainly sounds interesting and will go on my list to read.

Can you email me, I'd like to submit my upcoming novel (pub. Harper Collins) for your consideration. It's a conspiracy thriller with a twist I think you might like.

Thanks for not giving it away. Leighton's surprises are always so interesting and satisfying. You are so right; his stories are honest. No tricks on the readers!