The latest (and first) K.O. Dahl crime novel from Norway 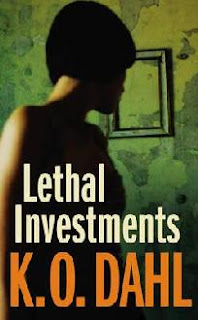 Lethal Investments, recently published in a translation from the original Norwegian by Don Bartlett, is the 4th of the novels featuring detectives Frølich and Gunnarstranda to be published in English but is in fact the first novel in the series. A young woman is murdered in her apartment, just after a man (a one-night stand) has left her. The detectives pursue the one-night stand (identified by a peeping tom across the street from the murdered woman's apartment) as well as her workplace, a decidedly odd software company full of suspicious characters.

What keeps the Gunnarstranda and Frølich novels lively is the conversation and inner monologues of the two detectives (one a short man toward the end of his career and the other a large man at the beginning). Neither detective is a typical crime-fiction policeman, though they share some characteristics with the standards of the genre (Gunnarstranda's wife has died, leaving him alone and lonely, and Frølich's relationship with his lover has its ups and downs), and the book is solidly within the tradition of the police procedural. But the two cops are not cliche partners, their relationship is decidedly spiky, and their dialogue is often realistically indirect and allusive, surely a challenge for a translator, but brought off very well by Bartlett.

What's going on in the software company will be more obvious to a reader now than it might have been some years ago when the book was published, but the story isn't otherwise dated or stodgy (it's just that there have been so many frauds exposed in real life in the past few years). Corpses begin to pile up, and there are some coincidental sightings of suspects as the cops drive around Oslo (on duty and off), but everything is brought off with naturalistic and believable style. The detectives remind me just a bit of the odd couple featured in Roslund and Hellström's Swedish crime novels, but without some of the extremes of those characters and Dahl's plots are more varied and more focused on ordinary crimes and everyday lives of contemporary Scandinavians than is the case with Roslund & Hellstrom's books (which frequently deal with international crimes and prison situations).

K.O. Dahl's novels are among the very best of Scandinavian crime fiction, and the author has a voice that is distinct from the rest.
Posted by Glenn Harper at 10:48 AM

I've just read/reviewed this one, too - it is 18 years old, which seems amazing. I did enjoy it but not as much as The Last Fix (my favourite) or The Man in the Window. I do like these books, though, and the rude interplay between the detectives - the Norway depicted here is more raw, upfront and natural than the rather smooth version presented in some other novels.