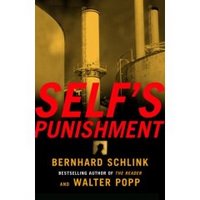 I promised a Finnish novel next (The Priest of Evil), but first...Bernhard Schlink, best known in the U.S. because Oprah Winfrey chose his book The Reader for her book club, wrote Self's Punishment, a detective novel, with Walter Popp in the late '80s, roughly the era in which the novel is set. Though Oprah's endorsement usually signals the middle-brow, The Reader was not so well received by some of her fans--who found it intellectual rather than oriented toward a story. Evidently Schlink has written other crime novels, but none have yet been translated into English. Based on Self, I'd like to see the others. Self's Punishment is as close to classic noir, in the strain from Marlowe to Chinatown, as it is possible to be in a contemporary (more or less--the novel is from before the fall of the Wall and seems a little quaint because so much has happened since then) German context. Self's name is Selb in German, and the name really needn't have been translated--the existential or psychological import of the translated name is not necessary, or even helpful, to the novel. And as is too common, the title is changed from something like "Selb's Justice" to Self's Punishment--which is also not really helpful. Self is a retired Nazi prosecutor who became a private investigator after the war. The novel is not, however, about the progress of a detective in the difficult years after the war or the years of the German miracle. It's about the past returning to bite him in the course of a routine investigation late in his career. The one false note (and I'll have to be careful not to reveal too much in this comment) is that he would have been chosen by his former school friend, Korten, to investigate a security breach in the Chemical firm Korten now heads. It might also be considered a flaw that Self is very good in hand-to-hand combat, considering his age--except that he's succesful more in anticipating his opponent than any fancy technique or physical power--and the fistfights keep the noir character of the novel at the forefront rather than the author's literary ambitions (noir being a physical medium more than a primarily intellectual one). Self, like Germany (a point made explicitly in the novel) has elided his guilt as a participant in the Nazi horror by immersing himself in the daily life of the post-War. The connection with the ambience of Marlowe and Chinatown develops slowly, in the very "daily," even quotidian investigation and life of the elderly detective. What develops is not so much sympathy for Self as immersion in the dailiness of his life on the part of the reader. So that when his investigation results in a death (perhaps more than one) and finally leads to its conclusion, it involves the reader in the network of guilt, politics, and history that Self is mired in. Self's Punishment is a quiet book rather than a sensational one, and the power of its central premise is more powerfully told than in the more typical melodrama of thrillers that try to evoke politics and history. Forget the Oprah connection--this is a book that is effective as noir, as narrative, and as a novel.
Posted by Glenn Harper at 5:48 PM

Ah, that's interesting. I remember that bloke being recommended by Oprah, and the American audience not really "getting" what he was trying to say about the novel. Anyhow, I think he did have another novel after "The Reader" published in the UK, I can't recall the name right now. But I haven't come across this one before. I'll look out for it next time I'm in Ottakars.