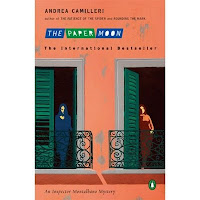 Newly arrived in English (translated by Stephen Sartarelli) is The Paper Moon, a Salvo Montalbano novel from Sicilian crime star Andrea Camilleri. As always, the prose is lucid and carefully controlled: We see everything from Salvo's point of view (though the story is told in the third person). The complexities of the tale involving a pharmaceutical salesman, his sister, his lover, and a second thread concerning politicians, the mafia, and drugs intertwine through Salvo's relations with his fellow cops (including the tongue-twisting Catarella), the police bureaucracy, and the seductive (in very different ways) sister and lover. And as usual, Salvo figures out what's going on just a step ahead of the dogged police investigation. There is a comfortable charm to these stories (not unlike the Botswana tales of Alexander McCall Smith) based on Salvo's irritable character, the comic relief of Catarella's attempts at speech, and the detailed portrait of the culture and cuisine of Sicily. However, beneath Camilleri's stories there lurks a dark and complex world of ruthless crime families and the tentacles they extend into the political and social life of Italy. The police cannot investigate some crimes directly, but only with elaborate fictions and misdirections that may or may not achieve justice or the prosecution of the guilty parties. So part of the particular charm of Camilleri's novels is an irony and an overt or covert violence that, together, give his books quite a sharper edge than Smith's Botswana tales. There is a kind of bitter comedy in the Montalbano novels that is lighter but of the same kind as can be found in Leonardo Sciascia (where the comedy is of dark and tragic proportions but the prose is nonetheless lucid). It's partly Salvo's own personality (emotions and appetites included) that gives a more accessible quality to Camilleri, in contrast to the more political and intellectual edge of Sciascia. The same can be said of the filmed versions of the two authors' books: Sciascia's novels have been made into existentially ominous crime films, and the TV series made from Camilleri's books is funny, entertaining, and revealing about the personalities as well as the criminalities of Sicily (as well as being very faithful versions of the novels, with a group of very effective actors impersonating the characters). In short, The Paper Moon is a vivid and justly anticipated continuation of a brightly written series with very dark undertones.
Posted by Glenn Harper at 11:12 AM