The Monster of Florence according to Douglas Preston and Mario Spezi 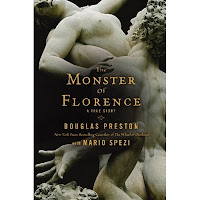 The new true-crime book by Douglas Preston and Mario Spezi on the famous Monster of Florence case is not a definitive version of the serial murder case. The first half is a delineation of the crimes and the response of the Italian police and carabinieri to them. The second half is a sorry tale of the miscarriages of justice and downright stupidities of the police and the judicial system, extending to the persecution and arrest of the two authors of this book for, apparently, the heinous crime of proposing a theory of the crime opposed to that advocated by the detective in charge of the case (and now crime fiction author) Michele Guittari and some of the public prosecutors involved. The Monster case has inspired several novels and movies (including Thomas Harris's Hannibal and the movie based on it, a Magdalen Nabb story, and Laura Grimaldi's The Suspicion, not to mention several nonfiction books including the one Giuttari brought out just weeks before Spezi's own book appeared in Italy and the first of Giuttari's own novels). So the story, though not well known in the U.S. except for a recent network newsmagazine segment on Preston and Spezi, has been widely discussed and analyzed. What's different about the P/S Monster book is that it's about the mangled investigation and its consequences more than it's about the murders. And Preston is a novelist producing a non-fiction text, but with some of the sensibility of a fictional account. The account, though, becomes more and more about Preston and Spezi as they are targeted (spitefully, it seems) by the investigators. In a way, the last half of the book is a harrowing memoir more than investigative reporting--revealing not only the authors' difficulties but also a few really stupid things they do (given what they already knew about the police and judiciary involved in the investigation). So it's a hybrid, albeit a fascinating one. And it gives a perspective on Giuttari the novelist that makes me hesitate to continue to read that policeman/author's novels any further—Preston's acccount convinces me that Giuttari's experience as a detective does not, in this case, make him a reliable portrayer of the profession. Is that fair?
Posted by Glenn Harper at 6:28 PM