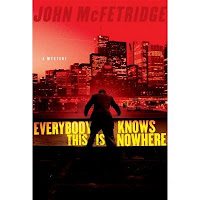 Everybody Knows This is Nowhere brings back some of the characters in John McFetridge's first book, Dirty Sweet, but as bit players. Everybody Knows includes more police procedural and more mob insider stuff than the preceeding novel, and splinters the point of view among a larger cast. In fact, different readers might identify different characters as the "protagonist" or most interesting character--McFetridge has made several of them central enough and interesting enough that no one of them takes definitive center stage (and a number of them are of "a certain age": McFetridge likes to foreground the thoughts and interests of people on the near and far side of their 40s). Perhaps the city of Toronto is more of a central character than anyone else (and the reference in the title, taken from a Neil Young song, is to current and former attitudes to the city). And where the characters in Dirty Sweet seem, as I mentioned in my last post, to be telling the novel's story to each other, in Everybody Knows, they are mainly lying to each other, and keeping the reader in the dark in ways that move the story forward in an indirect, meandering line. The indirection and the meandering are actually some of the author's strengths: the novel is about talking, and talk that both reveals and conceals not only the events but also the personal truths of the speakers. The "maguffin" is an Iranian immigrant who plunges to his death, onto the hood of a car occupied by a john and his "date." From that event there emerges a sequence of characters: a marijuana grower under house arrest (and her daughter and partner in the trade), several cops (of French, Native, Scottish, South Asian, and several other backgrounds, emphasizing the multi-ethnicity of the city), a prominent biker-gang member in from Montreal to shake up the local drug trade, several biker "hangarounds," a barge captain and his weed-growing partner, and more. The Montreal biker-in-a-business-suit (Richard), the grower (Sharon), the barge guy (Ray), and two of the detectives (new partners Bergeron and Armstrong) are the most frequent speakers (and points of view), anchoring the narrative's "sex. dope. immigration. gang war. filmmaking," as the p.r. from the publisher, Harcourt, would have it in this Toronto that might be "the new L.A. of crime fiction." Though the author is not constructing a traditional mystery or procedural with a "reveal" at the end, there are several surprises that, in retrospect, the reader will see as the logical undertone to the stories and lies that have been accumulating all along. This is a very cold-blooded bunch, including both those who end up dead and those who either get away or take control. McFetridge is building a running history of his city, something like Pelecanos is doing in D.C. or Deon Meyer in Cape Town, with characters coming in and out of focus over a number of stories and novels. And no matter how cold they are, they're good company for us and for each other (one of the things that McFetridge's cast of characters shares with the writer he's often compared to, Elmore Leonard). I for one am eager to follow their their further conversations and exploits.
Posted by Glenn Harper at 8:47 AM