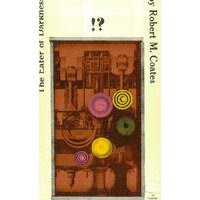 There's been a lot of stuff in the blogosphere lately about forgotten books, and my own entry on the subject will be appearing in the series that Patti Abbot is publishing on her blog, pattinase.blogspot.com, But First! as they say on those late-night TV commercials, I have a few thoughts on some other forgotten books that are at least loosely in the crime genre. The first and possibly most forgotten is The Eater of Darkness, by Robert M. Coates, which had a hardback edition in 1929 and a paperback edition in 1959, and that's it. The book has a lot in common with Flann O'Brien's The Third Policeman, which is often listed by writers and bloggers as a crime novel (more of a ghost story, really, but that's for another time). Both O'Brien's and Coates's novels also have something in common with the estimable Declan Burke's web novel, Gonzo Noir, published on his blog, Crime Always Pays. What they all have in common is literary experimentation based on pulp- and crime-genre themes and tropes. In the case of the earliest of these three, The Eater of Darkness is the story of Charles Dograr, a young American who returns from France to New York and meets a strange old man who has invented a sort of laser-like death ray. The old man tricks Charles into pulling the trigger, after a fantastic description of the ray penetrating buildings and people as it is focused by the old man on his intended target. From there, Charles becomes infatuated with the power of the weapon and helps the old man plan an elaborate bank heist that will use the weapon to remotely kill the armored car guards and bank employees and anyone on the street during the heist. Along the way, Charles becomes involved with a young woman related to Charles's first victim, a beautiful woman who has been watching him from across the street, an elaborate plot twist or two involving the bank job and other things, and the woman he left behind in France. The plot seems to be strictly in parallel with thrillers of the novel's day, and even much crime fiction that has been written since--except that the exposition is wild and unpredictable and the conclusion, while quite different from the famous ending of The Third Policeman (recently endorsed by the TV show Lost), takes the same liberties with a straightforward story. The Eater of Darkness has been called the first Dada novel in English (and it was indeed published with the help of Gertrude Stein)--I wouldn't go that far, but it was decidedly written under the influence of the literary upheavals of the early 20th century. However, Coates was more interested in playing with the conventions of the thriller than with breaking new literary ground (and for that reason resonates with Flann O'Brien's other masterpiece, At Swim-Two-Birds, another wild comedy). All the twists and turns are impossible to describe, and the literary hijinks are both sophisticated and funny--but one of the most interesting and entertaining aspects of Coates's novel is that the thriller plot works, in a sci-fi, Three Stooges sort of way. When I first read The Eater of Darkness, I made the mistake of trying to make straightforward sense of it--is the story a dream of one of the characters about another, absent one? Is it a fantasy about America, like Kafka's amazing Amerika (another book that The Eater has something in common with)? But it really only works if you disengage the brain and all your tendency to interpret or make sense of it. If you can do that, it's a lot of fun (if you can find a copy--and there are still some floating around that don't require you to rob an armored car to pay for). Coates, by the way, went on to write a pretty good ghost story, Wisteria Cottage, as well as a bohemian novel, Yesterday's Burdens, and other literary books, as well as being the art critic for The New Yorker for a while. In the intro to the paperback edition he seems partly proud and partly embarrassed by the youthful exhuberance of his first novel. But don't let his later credentials or the ambivalence of the adult literateur put you off.
Posted by Glenn Harper at 6:36 PM

Very interesting, Glenn. If you have a certain type of mind, it is very hard to suspend your need for everything to make complete sense in short order. If I can do suspend it, which is rare for me, it allows you into a more heightened reality I think.

Hi, I found this blog while doing a google search. This is one of my favorite books, though if I hadn't already known the plot beforehand from reading about it on another website, I would've had no clue what was going on, and even then it took a second read to grasp it. The whole book is supposed to be a story within a story or a fantasy being written by the woman from the beginning and end about her husband. I'd say it is more of a novel influenced by surrealism than being a 'dada' work (that is reserved for the random and almost unreadable 'Tenderenda the Fantast' by Hugo Ball). If the last publishing date was 1959, it is likely that the copyrights are now expired, though according to the copyright office (I don't really understand those documents so forgive me) it may or may not have been renewed after its expiration date. Hopefully, its in the public domain and we can see it republished. If not, I wonder who has the rights now, as both Coates and his wife are deceased.

It pleases me to find people online who share my enthusiasm for Coates's work. However, I would like to add a few remarks to what has already been said here.

-The Eater of Darkness was first published by Robert McAlmon's Paris-based Contact Editions in 1926. After that, it went through two American editions in 1929 and 1959. Between the three editions, there are some differences, most notably between the 1929 and 1959 editions of the book. In the 1959 edition (the cover of which is shown here), several supposedly outdated cultural references have been updated by the author. Because the book was printed using the plates from the previous editions, the emendations can be easily spotted, as they are in a different font.

-Also, Coates was in fact The New Yorker's art critic for several decades (in which capacity he coined the term Abstract Expressionism in 1946). Before turning to art criticism, however, he did a brief stint as literature critic for the magazine. As he did not really enjoy this work and felt that it impeded his own writing he soon abandoned this job. In Yesterday's Burdens the narrator is also a book reviewer, and indeed shows many other similarities with the author himself.

-As a matter of fact, Wisteria Cottage is not a ghost story but a crime story.

2. Although the book could be read in conjunction with Flann O'Brien's work (particularly At Swim-Two-Birds because of the play with narrators and levels of narration), it would be much more fruitful to place it in a French tradition of writing, most notably the dadaist and surrealist modes that he was exposed to during his time in France. Not only stylistically do Coates's early works fit in snugly with the agenda of the 1920s Paris-based avant-garde, but also in terms of his subject matter can he be associated with dadaism and surrealism in particular: in its use of popular culture, The Eater of Darkness (and Yesterday's Burdens as well) seems to take its cue from the dadaists and the surrealists. The Eater of Darkness is perhaps first and foremost a spoof of pulp crime and detective fiction (both film and books) -- in fact, such fictional characters as Fantômas and Nick Carter feature in the novel's dedication. Such elements as the characters' multiple and often simultaneous roles are inspired by crime fiction such as Allain and Souvestre's Fantômas series. For an interesting discussion of the use of pulp fiction by the surrealists I recommend Robin Walz's Pulp Surrealism (2000). Much of what he says about the myth of Fantômas also applies to Coates's first novel and his little magazine publications.

In terms of the absurdity of his work and the quality of his humour Coates does not only resemble the Irish school (such as O'Brien, but also Beckett and Joyce (see for instance the Circe episode in Ulysses)), but also such lesser-known French protosurrealists as Alfred Jarry and Raymond Roussel. I agree with the author of this post that Coates's humour constitutes a great deal of his appeal, but for me the mindboggling style and literary tricks are quite as important for the novel's success.

3. With regard to a possible new edition: the copyright is owned by Coates's stepdaughter (by his second wife), who allegedly had it renewed recently. Although Dr. Mathilde Roza, one of the very few scholars writing about Coates, has put much effort into getting his work republished, publishers have not shown any interest at all in his impressive oeuvre, making (online) antiquarian booksellers probably the best place to acquire his works. Apart from The Eater of Darkness, Yesterday's Burdens, and Wisteria Cottage, I also recommend his three short story collections: All the Year Round (1943), The Hour After Westerly (1957), and The Man Just Ahead of You (1965). These collections contain stories that were first published in The New Yorker, to which Coates contributed over one hundred stories.

It is wonderful to know there is still interest in Robert M. Coates. Those who enjoy his work and want to know more about it, may like to know of the publication of the first literary biography on Coates, "Following Strangers: The Life and Literary Work of Robert M. Coates." It has been published by South Carolina University Press.
Mathilde Roza