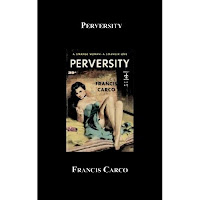 This is forgotten book week here and elsewhere around the web: I’ll be posting my official “forgotten book” of the week on Friday, but in the meantime I’ve been thinking about some forgotten books, and looking around my bookshelves, I discovered a book I had forgotten I owned, Perversity, by Francis Carco (a pseudonym of Francois Carcopino-Tupsoli, a French author of some literary renown). Perversity is a 1920s portrait of slum life in Paris, written with a lot of underworld slang that is ably translated or transformed by Jean Rhys (an amazing and very dark writer in her own right), though the translator is listed as Ford Madox Ford, her mentor and lover (see Rhys’s novel Quartet or the movie based on it). None of the other translations of Carco’s books have been so fortunate and the colorful language of the streets is reportedly lost in them. I have the original English-language edition of 1928, but Black Mask recently reprinted one of the paperback editions, which should qualify the book for consideration as a crime novel, or noir, or pulp.

J. Kingston Pierce at The Rap Sheet has posted a quote by G.K. Chesterton, "The first essential value of the detective story lies in this, that it is the earliest and only form of popular literature in which is expressed some sense of the poetry of modern life." Carco’s book certainly contains a sense of the poetry of modern life, though entirely from the darker end of the spectrum. The French literary establishment certainly understood what we would call crime fiction in the way described by Chesterton: that is to say, as more than simply popular literature, but there are a number of French literary novels of crime or the underworld that have been received on this side of the Atlantic as pulp (see the various paperback covers of Carco’s books attached herewith, as well as a similar cover for a French paperback of another of his novels).

When I took Carco’s book down off the shelf, I realized that I’d never actually read it, though I’ve been carrying it around as we moved from place to place for at least 25 years (it was given to me by an artist and friend in Atlanta). I discovered a bleak portrait of the underclass, portrayed as violent and almost subhuman, except in the liveliness of their language. Carco’s Perversity is a dark ride into the lives of 3 individuals whose prospects and horizons are very limited: a prostitute, her brother, and her lover, all confined to a tiny slum apartment that is the primary setting. Perversity is not a pleasant read, except in one’s appreciation of the writing and the translation, which are both lucid and direct. Maybe perversely (no pun intended) the brutality of the book and the writing were an antidote to the overly intellectual writing in France at the time (or the literary experimentation profusely demonstrated by The Eater of Darkness, which I reviewed yesterday), and therefore was regarded as literary because of its very un-literariness (perhaps a lesson we should all take to heart in current disputes over the literary worth of crime fiction, as in this year’s Booker Prize flap). The volume translated by Jean Rhys also includes a short story about a knife that is better in a lot of ways than the novel itself, about a punk who decides his knife is not the his weapon of choice. 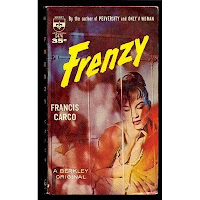 Truth be told, the bleakness and near-bestial quality of Carco’s work is hard to take in large doses, better sampled perhaps in the story. Though there’s quite sufficient parallel between Perversity and the American pulp fiction to justify those paperback covers for Carco’s U.S. publications. American pulp, though, is frequently leavened with comedy of an intentional or unintentional sort plus straightforward descriptions of violence and intrigue. What distinguishes Perversity from genuine pulp is perhaps the intensity of his grim portrait, with no comic relief and a long, grim buildup to a couple of short bursts of violence: so if its unliterariness is what makes it literature, maybe its very darkness keeps it from being truly noir? And maybe Carco "Americanized" his name to suit what he and his audience thought of as a brutal, American style of writing, thus making it more interesting to the French (as in all the American pulp novels made into French movies by intellectual filmmakers over the years)? In any case, maybe this is a book best forgotten or at least filed away among the forerunners of the modern crime novel.
Posted by Glenn Harper at 10:59 AM