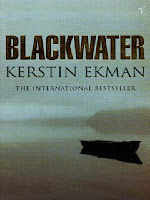 Taking a break from my trek into Cuban crime, I thought it might be a good time to remind folks that there's a Swedish crime fiction pioneer that hasn't been mentioned much in the blogs praising the more recent Swedish crime wave. Kerstin Ekman was originally a crime fiction writer, though of this first crime novels only one has been translated, as Under the Snow (published in Sweden in 1961, in English in 1997. She departed from crime fiction for some years (producing experimental and historical fiction that I know about, but I'm not an expert on her work), returning with a bestseller translated as Blackwater (published in Sweden in 1993, in English in 1996).

Under the Snow is itself an unconventional crime novel, dealing with a murder in a small town in the far north, investigated as much by a friend of the deceased as by the policeman sent out to look into it. The progress of the story and its resolution are indirect, but the form is that of a crime novel. The subject is hate, poverty, and racism in a small town, touching on Sami-Swedish relations. The position of the Sami is also central to Blackwater, which is a much longer and more complicated story, using a very violent double murder to talk about racism as well as small town hatred, a hippie commune, and a bunch of characters who are investigated in depth by the author. The story progresses slowly after the murder, for quite a stretch, with Ekman more interested in the characters and their interrelationships than in moving the investigation (by the town's police chief) forward. Then, in the book's second section, set 20 years after the first, a woman whose trip to the commune had initiated the novel recognizes someone who will lead to a resolution of the crime. Where another writer might have shifted quickly from that original time frame to the later one, Ekman (in this phase of her career) is more interested in drawing out that first setting and its population as long as she can give life to it, more in the fashion of a mainstream novel. But her skill in giving that life to the narrative makes the story hypnotic, even when it is moving very slowly. And when the "current time" narrative moves into gear, we are well prepared to understand and empathize with the story of the crime and its consequences, as well as the consequences of commune life, small town life, and life in the far north, with its divided cultures (one vastly more powerful than the other). Ekman's crime fiction has little in common with the better known earlier masters of Swedish crime, Sjöwall and Wahlöö, whose work is straightforward and linear (though there are gaps between the crime and its finall uncovering in their work as well). Even in the shorter Under the Snow, Ekman draws her characters in subtle detail, focusing on them more than on the plot. Sjöwall and Wahlöö draw their characters skilfully but in quick strokes, and use them to give the crime and the police a resonance in a social context that is their primary concern. I have to say, I'm more likely to re-read the Martin Beck novels again and again than to return repeatedly to Ekman's prose, but we should remember that Ekman's work is a lens through which we may better understand the more psychological and character-driven of contemporary Swedish (and Scandinavian) crime novels.
Posted by Glenn Harper at 3:28 PM

It has been nearly ten years since I read it, but I found Blackwater a very memorable book. It would be interesting to reread after having exposure to so many more Swedish crime writers.

I read Blackwater a few months ago, having read many good things about it (including in the "PS" section of one of the Sjowall/Wahloo books, Harper Perennial series). I found the first half extremely slow, and almost did not persevere. I am glad I did, I very much enjoyed it once it got going, but it was so sad. One of the saddest books I've read in the past year or two. I did not review it as I felt my skills as a reviewer were not up to all the things the author was saying and trying to achieve.
Interesting about the Sami angle - I'd temporarily forgotten that. We were having some discussion about "racism/immigration" crime at Crime Scraps and the FriendFeed group recently. I will make a note on the FF link to your blog.
Nice post, Glenn, as always.