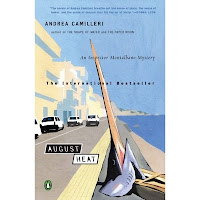 Karen at Eurocrime has already noted here that Andrea Camilleri pays homage to Maj Sjöwall and Per Wahlöö in his newly translated (by Stephen Sartarelli) August Heat, and that he also comments on the poorly informed critic or reader who denigrates crime fiction as inconsequential. Camilleri once again makes his own point in the novel as a whole, as well. August Heat begins with more comedy than usual (and his novels are often very funny), even after the discovery of a terrible crime. There are many twists and turns in the plot as a murder leads to the discovery of illegal construction jobs, the cover up of another death (possibly murder) of an illegal immigrant, and (as is often the case in Camilleri's Salvo Montalbano novels) threads of Mafia influence on politics, the law, and daily life in Sicily. We expect the depiction of the stark, beautiful landscape and the tantalizing cuisine of Sicily in the Montalbano novels, and August Heat delivers on those scores. The story also gives a palpable sense of the brutal weather of a Sicilian August. But the charms of August Heat have more to do with the increasingly melancholy (though still dispeptic and irritable) Montalbano and his relationships with Fazio and Catarella (especially) among his police colleagues, with his girlfriend Livia, and with various sympathetic and unsympathetic people involved in the crimes in one way or another. The comedy, much less the surprises in the investigation, would be spoiled if I say much at all about the plot, so I will add only that Camilleri proves once again that he is the deserving heir to Leonardo Sciascia's terse, evocative portrayals of life in Mafia-ridden Sicily, and Camilleri adds to that deep note a light tone and comic touch that are decidedly his own. Sartarelli also once again demonstrates his ability to render an idiosyncratic (both Sicilian and, so I've been told, uniquely the author's own) language of Camilleri's Montalbano novels. There's one additional pleasure still awaiting the reader of this book: seeing it (or for that matter any of the other Montalbano stories) depicted in the excellent Italian TV series based Camilleri's work. And I want to thank public libraries all over the world, especially the Montgomery County Maryland library system--I've been getting a number of the books I review here from the library (including novels by Camilleri, Håkan Nesser, Bill James, and many others); the library makes it possible for me and many others to enjoy these great crime novelists work.
Posted by Glenn Harper at 8:29 AM

My name's Dan and I'm a producer for Here on Earth: Radio Without Borders, a global culture program on Wisconsin Public Radio. We're thinking about doing a show on International Noir and Crime Fiction, and I wondered if I could talk with you about the subject -- I couldn't find an email address on your blog to contact you, which is why I'm leaving a comment here. I'd appreciate it very much if you would shoot me an email with a phone number to contact you if you're willing; my email is danrl@wpr.org . You can find out more about our program at www.wpr.org/hereonearth .

Great post, Glenn. I didn't think August Heat the best of Camilleri's (I particularly loved the previous one, Paper Moon), but nevertheless, I enjoyed reading it last weekend. I found it slightly more perfunctory than some of the others. I felt that the descriptions of the weather and the way these were incorporated into the plot and characters' emotions were very strong, as you say. Superb. The translator is brilliant, as ever.