Matti Joensuu's To Steal Her Love 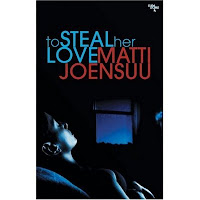 We in the English-speaking world rarely get access to Finnish crime writer Matti Joensuu's novels. The Stone Murders, published by St. Martins in 1986, was translated from a 1983 original which was not, I think, his first novel; To Steal Her Love, recently published in Arcadia's EuroCrime series, is translated from a 1993 original. The Priest of Evil, published in 2006 by Arcadia, is from a 2003 original (the later two translated by David Hackson, the earlier one translated by Raili Taylor). So of Joensuu's 10 novels, we have only the ones written at 10-year intervals (and in fact, there was a 10-year gap between The Priest of Evil and To Steal Her Love (published here out of order). However unfortunate it is that we have to wait, and that there are 7 of Joensuu's novels featuring Helsinki detective Timo Harjunpää still untranslated, we are lucky to now have To Steal Her Love, which succeeds on every level. Whereas The Stone Murders was a story about violent youths, through the experience of a humane and serious detective, To Steal Her Love is a broader canvas, suggesting at times the socially conscious novels of Sweden's Sjöwall and Wahlöö and at times the police thrillers of Norway's Jo Nesbø. Joensuu presents the story with occasional humor and with the authenticity a reader might expect from his background as a police detective. The police hierarchy is dysfunctional (more so than in the other two translated Joensuu books) in a totally believable manner. There is a malicious detective obstructing Harjunpää's progress in the investigation, but the relationships and motives between them are more everyday than is the case in the more dramatic subplot running through several of Nesbø's books. There are numerous cases that Harjunpää is called upon to investigate, some related to the main story and some not (making his life as a cop seem more authentic than in the one-case-only sort of police story): some of these cases (major or minor) are resolved and some are not, or only partially so. Harjunpää's private life, which features in all the novels, is here more completely delineated (though not so tragically as in the ending of The Priest of Evil). As in the later novel, the narrative is partly from the point of view of a demented criminal, though that criminal is more sympathetic than the riveting but totally evil character in The Priest of Evil. Tweety (named for his large head and small thin body) picks locks (by seeing the "colors" of the interior mechanism as he works a pick through it), and he also animates everything in his surroundings. He names everything that is important to him: each of his feet has a name, his flashlight and knife have names, and he gives his own names to the women whose apartments he enters when they are asleep. That plot concerning his molestation of the women does not go in the direction you might expect, and neither does the other major crime depicted throughout its planning and execution, a bank robbery. Tweety's criminal family is depicted mostly through his eyes in an almost Faulknerian fashion. But in spite of the almost Surrealist character of the story as seen through Tweety's eyes, and in spite of the complexity of the interwoven narratives, the story moves swiftly through the book's 300 plus pages (at least half again as long as either of the other two books by Joensuu that have been translated into English). The story moves along at a proper pace for a crime novel, but it encompasses more environmental and emotional scope than the average crime novel. And it accomplishes all that without a murder directly related to the central story: There are several corpses but for the most part we follow Tweety's frequently frustrated attempts to caress women in their sleep and his family's accelerating bank heist plot, from both the criminals' and the investigating officers' points of view (all told in the authorial 3rd person). And as a bonus, we get detail that fills out the stories of Harjunpää, his family, and one of the other detectives as glimpsed in the other books. After the experience of reading To Steal Her Love, I have to go back and read the other two, and reassess the less-than-glowing review that I gave to The Priest of Evil when I've come back to that book after finally being able to read its predecessor. From our first glimpse of Tweety's distorted perspective to Harjunpää's discovery of a headless corpse floating in the sea to the outlaw family's home life to Harjunpää's difficulties with the bureaucratic forces above him in the police force, To Steal Her Love is as good as any and better than most of the Scandinavian crime novels that have been highly praised here and elsewhere--and To Steal Her Love has numerous innovative and unusual qualities that makes it stand out in its own right. I was bowled over by it, and read almost straight through its 300-plus pages. This is a book that deserves a wide audience, much wider than Joensuu has up to now received in the English-speaking world.
Posted by Glenn Harper at 10:24 AM

For a really dark novel, try Chris Kape's "A Diary of Wasted Years," by Eloquent Books. Really dark and full of unexpected twists. It's worth it.

I enjoyed this review so much that I went straight to Amazon after reading it and ordered this book. Not that I don't have 300 plus on my shelves already, waiting to be read, including my recent embarrassment of riches from Crime Fest! What a tragedy about the crazy translation order, though. Many authors suffer from this, but this one more than most, it seems.

Let us know if you decide to try the book by Chris Kape that Anon recommends.