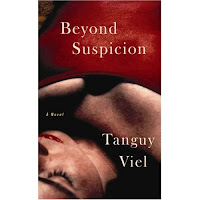 Though the film and fiction term "noir" comes from French, the French model for crime fiction remains American. In Tanguy Viel's Beyond Suspicion (translated by Linda Coverdale and published by The New Press), the conspirators in a "perfect" kidnapping scheme dream of getting to "the States" and prefer to think of the ransom as "a million dollars" rather than a million euros. The plot is also classic American noir: a "hostess" from a bar (Lise) and her layabout boyfriend (Sam) reel in a rich widower (Henri) and plan an amateur kidnapping (Lise will be kidnapped and held for ransom). the other important character, Henri's mysterious brother, is mostly offstage. The atmosphere and style, though, are all French. Sam is the only voice in the novel, he's the narrator and there's not much dialogue. The story is told in almost a stream-of-consciousness style, moving from the wedding of Lise and Henri to the kidnapping with frequent detours to the past and glimpses of the narrative present. French reviewer Dobrina Clabeaut called Sam's voice "disembodied" and also refers to the characters as stupid and trivial, all of which is true. But Clabeaut also describes being caught up in the flow of words, the poetry of the language, overcoming the triviality of the characters and the plot, and I'm afraid that didn't happen for me. Thankfully, the novel is very short, really a novella. 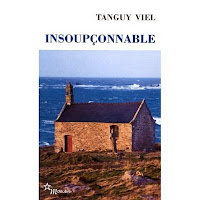 And the characters are indeed trivial, both in their personalities and in the weight they have in the story: we don't really end up knowing much about them, not even Sam's impressions of them (or even much about Sam). They're all types, exhibiting typical behavior like desire, deception, and jealousy. In a "foreword" to the U.S. edition, Jonathan Lethem says that the French response to the noir genre is to "purify it in the mode of a dream, to stalk its alienated essence," and Viel certainly does accomplish that. Beyond Suspicion is a literary achievement, perhaps, and even in translation the language is fluent and vivid (if not persuasive, in terms of making the plot seem more plausible). The plot is simple enough (suggesting perhaps classic French crime writer Sebastien Japrisot, though not his directness of style), but there are (to me) some gaping holes in the way it plays out in the end (a flaw in their plan leads to a clue that seems pretty trivial, leading them to take steps that seem hardly necessary--though the emotional (and literary) resolution requires them to take those steps. A pleasant, quick read but I prefer the direct "show me" style for this kind of story rather than the indirect "tell me" style (Jim Thompson, say, rather than Paul Auster, a name invoked by Lethem in the foreword). Oddly, the U.S. edition's cover takes a more indirect, suggestive image and the French edition uses a very literal image of an important site in the plot, the Americans emphasizing the literary quality of the book and the French emphasizing its roots in crime fiction. Another "alternate covers" question for you: which is more effective for this sort of literary crime narrative)?
Posted by Glenn Harper at 8:16 AM