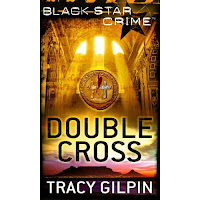 Like Stieg Larsson in his Millennium trilogy, Tracy Gilpin in her Cape Town crime novel Double Cross makes reference to Pippi Longstocking. But unlike Larsson's young heroine, Gilpin's main character, Dunai Marks, in spite of being a single mother, is callow young woman who comes across as even younger than she is. The short novel has some suggestions of "young adult" fiction and some slight hint of romance fiction (the publisher, Black Star Crime, is evidently owned by Harlequin), but manages to achieve some credibility as a crime novel that is also something of a coming-of-age story. Dunai arrives at her job in an NGO/activist organization to find that her boss, Siobhan Craig, has been murdered. The overburdened police seem happy to dismiss the case as a burglary gone bad, and Dunai sets out on her own investigation--setting in motion what seems to be an "amateur detective" plot. But partway through that plot gets derailed by a global conspiracy, not toppling over into DaVinci Code territory, but almost. And right in the middle of the novel we get a political lecture that is interesting in its own right (dealing with questions of the justification of violence in the service of righting social wrongs, a major theme of the book), but the lecture interrupts the novel's forward motion. When we get moving again, the plot mixes the conspiracy, Dunai's investigation (along with a helpful private investigator who threatens to become Dunai's love interest in spite of her original antipathy to him), and various threats from several Cape Town lowlifes from both ends of the social spectrum. The story never quite settles down, and the conspiracy doesn't have much to do with the crime under investigation, but the theme of violence and revolution is interesting, and the local color in Cape Town is handled very well (Double Cross shows Cape Town more thoroughly, from the Cape Flats to the Company Gardens, from Robben Island to the Bo-Kaap neighborhood) than most other South African crime novels). The conspiracy is interesting in itself (spoiler alert!) dealing with a 1,500-year-old feminist religious heresy and political backlash, but the terrorism that the plot actually hinges on is elsewhere. And it seems to me that Gilpin loses an opportunity to link to historical feminist movements, like the Beguines, which might have given more of a conspiratorial hint of authenticity (as in some of Pynchon's stories or for that matter Dan Brown with his templars), as well as a bit of historical education for the reader--but I'm not one to tell a writer what to do, and Gilpin may have had good reasons for inventing her own feminist conspiracy (or for all I know her conspiracy may be based on a historical model, I just couldn't find it with a web search). There are hints at the end of the novel that Gilpin has in mind a continuation of this novel into a series, with Dunai joining forces with her friend the detective and also with further exploration of the links and conflicts between the conspiracy and the South African government--and I'd certainly happily follow these characters in their further adventures. Dunai has experienced some disappointments and some enlightenment regarding the realities and dangers of the world and it might be interesting to see how she progresses with further relvelations and experiences, much less the considerable opportunities for portraying crime in Cape Town and environs. Speaking of which, I'm moving on to the new anthology of South African crime writing, Bad Company (edited by Joanne Hichens and published by Pan Macmillan South Africa) which I've been looking forward to since first seeing it mentioned on the excellent Crime Beat blog at http://crimebeat.book.co.za/, dealing with the new South African wave of crime writers.
Posted by Glenn Harper at 11:49 AM