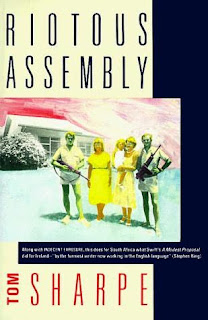 We've heard a good bit about the pioneering novels of James McClure lately, and his stories include a good deal of brittle, even bitter comedy. But there's another pair of novels featuring Apartheid era police that broadens that comedy into laugh-out-loud fun, believe it or not. Maj Sjöwall said in an interview that the subtitle to all the crime novels she wrote with Per Wahlöö, "The Story of a Crime," refers to the crimes of the welfare state at least as much to the crimes the police investigate in the stories. Tom Sharpe's two South African novels take that idea several steps further: his stories of the police in "Piemburg" are a farcical vision of social crimes before the fall of white supremacy there. Perhaps less farce or satire than lampoon: The books are very violent and violently funny, perhaps the funniest crime novels ever, and two of the funniest books of any sort that I have ever read. With the added "frisson" that Sharpe's opinions so offended the government that Sharpe was imprisoned and then deported. Called to the scene when an upper-class white woman murders her Zulu cook, Kommandant Van Heerden (who thinks of himself as an English gentleman), trigger-happy Konstable Els, 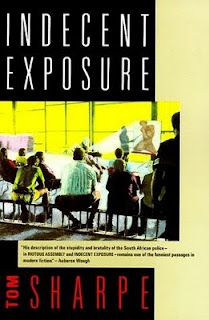 and paranoid security man Lieutenant Verkramp have to deal with miscegenation, S&M, a Bishop who is sentenced to be hanged, and a Keystone Kops police action that is unbelievably funny.

This post is a little short, since I've been struggling against a total lack of electricity at my house since last Sunday afternoon, hampering reading as well as on-line time--back on the power grid today, but busy throwing out everything in the refrigerator...
Posted by Glenn Harper at 4:58 PM

Sure never new there was such a sub-genre as Apartheid comedy. Sounds like good stuff.