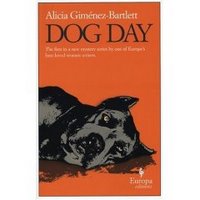 There is a genre of crime novels that includes (as one of its characteristics) a close focus on police rather than on the traditions fo the mystery, police procedurals that take seriously the cop's point of view, in form as well as in the profession of the protagonist. Dog Day, by Alicia Giménez-Bartlett, is one of those crime novels. There is a mystery, just as for any police investigation, but there is no series of clues, no unveiling of the "least likely suspect." There is no reason for a reader to pick out the murder or murderes in this story from the rest of the characters. The crime is clarified through successive discoveries of evidence and witnesses, gradually, as if a lens were gradually being focused on the crime. The discoveries are not prefigured or hinted at before the police themselves reach the point of disclosure. There is an element of dramatic irony (a trope characterized by the audience knowing more than the characters), in that surely a reader (an American reader anyway) who will guess a crucial fact of the investigation long before the police do (I won't tell you what that fact is, but it has to do with dogs, like much of the plot of Dog Day). But for the most part, Gimenez-Bartlett stays narrowly focused on her detective, Inspector Petra Delicado, the first-person narrator. We follow everything through her eyes: the facts of the attack that begins the case and the subsequently discovered dog-thefts; the people met (and relationships begun) in the course of the story; the irritations of her relationship with her sergeant/partner; and the meanings that the case takes on for Petra and the other characters (insofar as she understands them). The writing is much more direct than in the most famous Spanish detective series, the novels of Manuel Vazquez Montalban, whose books are to me less satisfying as "noir fiction" or crime novels than those of Giménez-Bartlett (Vazquez Montalban is too digressive, too indirect for me--his concern frequently seems to be mostly with a pair of problems--what's for dinner and what are the political implications of a crime). Although the Montalbano novels of Sicilian writer Andrea Camilleri are (like the name of his policeman) based upon Camilleri's fondness for Vazquez Montalban's novels, Camilleri's books are (like those of Giménez-Bartlett, based on the only example to be translated thus far) more direct and more enjoyable, though both he and she share the older novelist's penchant for specifying what's for dinner (and lunch) and both, like Vazquez Montalban, are careful to include the social environment as both setting and ultimate cause of events. Giménez-Bartlett in particular evokes Spanish fatalism in the face of the horrors as well as the pleasures of life--and her detective's cheerful fatalism maintains the true noir spirit even in the most light-hearted or comic episodes of her novel. I will put Giménez-Bartlett on the lenghtening list of novelists in other languages for whose translations I will await impatiently (and thanks to Europa editions for bringing her books and those of other crime novelists into English).
Posted by Glenn Harper at 2:16 PM