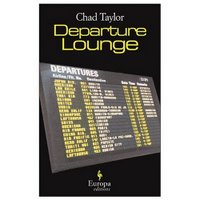 Departure Lounge, by Chad Taylor, is in the noir mode, and it's very well written--but ultimately its aims are more literary than noir. It can even stand up to a literary analysis, as an allegory of (as is often the case with literary fiction) the writing of literary fiction. A writer is a kind of thief, stalking people, invading their homes, and rummaging around in their stuff. That's exactly what Mark Chamberlain, Taylor's first-person narrator, does. But on one of his forays into other people's lives, he runs across a memory from his own, by stepping into the apartment of the recently deceased father of one of his schoolmates, Caroline, a girl who simply disappeared one day. The rest of the novel could be read (again if you are into literary analysis) as a series of tropes that show the ways of telling a story: the noir surface narrative, the family narrative, the urban legend, the rumors (such as, in this case, brought false news of the girl's whereabouts to the police and to her schoolmates), as well as photography and film as modes of narrative (standing in for the visual arts as a whole, represented by a gallery exhibition in which the photos and film are shown). The novel is not a pastiche of these ways of telling a story, though--Taylor's narrator stays in character as a noir hero, shifting ground only in flashbacks to the disappearance of Caroline and to related events in his youth. All the other forms of narrative are referred to, as alternate tales or alternate endings to the one being presented. And, in literary fashion, the multiple threads of the tale are never wound together, and the reader is left to his/her own thoughts about the story and what might have been "true," how either Caroline's or Mark's story might end. I've complained about literary noir before, in particular about the usual failure of the writer to get to the meat of noir fiction by condescending to the form. Taylor doesn't quite do that, although he violates some of the expectations of the genre (for a resolution, for example--though of course The Maltese Falcon doesn't exactly resolve itself). And the writing is beautiful but simple, appropriate to the kind of noir and the kind of the literature that the author is striving for. It would even make a good movie, but it would be more like Blowup than The Big Sleep, more like Blowup than Blowout, even. And to refer back to a comparison I've made recently, the novel is more like Faulkner's Sanctuary than Chase's No Orchids for Miss Blandish, though Taylor is both clearer in his style and more respectful to the form of noir than Faulkner. It is typical of Taylor's intentions that his title refers not to anything concrete in the novel but to a metaphor that is used by the narrator to describe an "in between" state of being neither here nor there, a philosophical description of the characters' state and of human life, when looked at through a philosophical lens. Taylor has at least 3 other novels published, though only one, Shirker, is available widely in the U.S. (or elsewhere, as far as I can tell, outside New Zealand). Shirker sounds like a more extravagant departure from noir, including travel to other dimensions of reality--I've sent for it so I'll let you know, though I'm usually not too enthusiastic about that sort of genre-mixing.
Posted by Glenn Harper at 2:47 PM