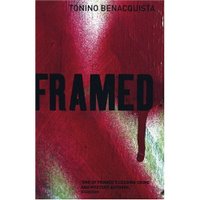 Framed, the third novel in translation from French crime-writer and film writer Tonino Benacquista, fulfills the promise of his first novel, Holy Smoke, much more than the second novel, Someone Else. But Framed is very different from Holy Smoke (and from the Highsmith-y Someone Else). If you want the further adventures of the comic hero of Holy Smoke, in translation, you'll have to read the subtitles of a film from a couple of years ago, Love Bites. Framed is not a series novel, but it is indeed noir fiction, in the tradition of, perhaps, David Goodis. Antoine (the trick of naming his hero "almost" after himself is not intrusive here or in Holy Smoke) keeps his day job, as an art handler in a contemporary art gallery, and his night passion, for billiards, completely separate--his friends in one world know nothing of the other world. Unlike the choice that classic noir would surely have made, most of the novel focuses on the day world (dark though it indeed is) rather than the billiard hall. The choice is telling: Benacquista lets us know that he knows where his tale would traditionally be told, and indeed comes back to that world for his denoument; but he shifts the focus into a new realm for noir, fully and realistically rendered (if quite cynically portrayed). Framed is a short and fast novel, a fun read, and highly recommended.
Posted by Glenn Harper at 2:29 PM