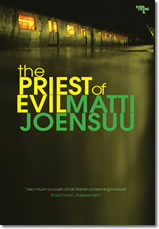 Matti-Yrjänä Joensuu is that rare commodity, a working policeman writing police procedurals. The police portions of his novels are as correct and convincing as you would imagine they would be. But there are some problems with his recently translated The Priest of Evil. First a small thing that I find annoying whenever this sort of thing happens in a novel. The author (or translator, but in the circumstances I lay the error at the feet of the writer and his editor) portrays two detectives staring at sections of CCTV surveillance videotape with a magnifying glass, investigating the images of a murder suspect frame by frame. It's a technical thing, perhaps, but if you think about it for even a second, you should realize that there are no images on videotape that can be seen with a magnifying glass, not frame by frame or any other way. He's thinking film, but of course no one uses film in closed circuit cameras in public places (in this case the Helsinki Underground). That mistake doesn't make me throw the book across the room--not quite. The other problem with this novel is bigger. Joensuu spreads the story and the narrator's point of view across several characters in addition to his detective, Harjunpää (his detective in nine novels, only one of which has previously been translated, some years ago, as The Stone Murders--see my earlier post). The splintered narrative is hard to follow at first, and then hard to stay interested in. The effort is ultimately rewarded as the narrative begins to pick up speed, but there are lots of repetitions in both the killer's religious iconography and the detectives' rehash of the clues. Repetition is one of the tricks of the fiction trade (you have to remind the reader of what's gone before because the novel is too long to expect the reader to remember everything), but too much repetition of details can clog up the narrative--as it does for a long time here. The murderer/priest is one of the narrators, and his delusions are intricate but not particularly credible as a paranoid fantasy. The other characters, two children and the father of one of them, are caught up in Joensuu's extended portrait of unhappy families and awful parents (Joensuu, judging from this novel and The Stone Murders, is very interested in families and children, and the socioeconomic framework that supports them). There is also an evident attempt at reflexivity: one of the children is named Matti, and his father is a novelist with a triple name--both factors that point to Joensuu having placed himself metaphorically in the narrative on the side of the civilian-victims rather than his detective or villain. That reflexivity, and his interest in families, suggest that unhappy families, divorce, and family violence and retribution are important to Joensuu. But he doesn't make them all that interesting, and his story is a bit earnest for my taste (none of the wild, dry Finnish humor of the Raid TV series--see my earlier post--or the movies of the Kaurasmaki brothers. And one more complaint: the print in this English version fo the novel is too small, a factor that isn't always irritating, but when I'm already irritated with a book, it makes reading the text all that more a trial instead of a treat. But all my complaints and reservations apply for the most part to the considerable effort of getting involved in The Priest of Evil. If you stick with it, somewhere around halfway through the book the narrative picks up speed, begins to make more sense, and sucks you into the inevitable progress of the characters toward one another and toward a climax. The improvement in the book is proportional to the amount of space given to the detectives rather than the killer, who never really comes alive in spite of his malevolent potential. The conclusion contains several surprises and develops from the author's concern for families rather than a straightforward plot--though because of that shift away from the conventional detective novel, the ending is not what you expect. Altogether, I'm glad I persisted through the novel, but it could have been as good as its best passages, but it unfortunately isn't. And of the Euro-Crime series published by Arcadia Books that I've already read (including the quite excellent Dominique Manotti novels from France) this one is the least satisfying as a whole.
Posted by Glenn Harper at 11:16 AM