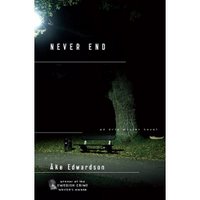 Two new Scandinavian crime novels have arrived, Never End, by Åke Edwardson, and What is Mine, by Anne Holt. This post will deal with the former, and I'll get to the second one next week. I didn't much like Edwardson's first novel in English (Sun and Shadow, see the post on Scandinavian noir in my August 2005 archive). But Never End is much better--less of the "soap opera" of the detective's home life, more about the social situation (the "New Swedes," as they are politely termed in the novel--immigrants that are a new feature of contemporary life for Sweden). The novel is a straight-ahead police procedural focused on an investigation that seems to be going nowhere for most of the novel (something like what I think is the best of the Walander books, the first one). And there is an interesting reversal of the usual pattern in noir and crime fiction. Normally, the story begins with a measure of complexity, which is resolved into a clear picture of events as the detectives find out more and more. In Never End, the case keeps getting more and more complicated as the facts are (almost grudgingly) revealed. Even the somewhat abrupt conclusion leaves more murders, more crimes, more diverse involvement in events than any reader would have expected at the beginning. One other improvement over Sun and Shadow--Edwardson's telegraphic style is used to better advantage in Never End, giving a breathless quality to the story as it advances, and providing a linear drive that is lacking in the stories diverging links. One irritating tic in the book--the detectives return again and again (and again) to a grotto in the park, where current and former victims were raped and murdered, to meditate on the crime. Enough would have been enough. I almost didn't bother with Never End, due to my dislike of Sun and Shadow--but my change of mind is amply rewarded in the pleasure of this second book in English from Edwardson's "Erik Winter" series. One further comment--U.S. reviewers frequently complain of the dour, serious quality of Scandinavian crime fiction, and I believe it was the New York Times crime reviewer, Marilyn Stasio, who made that complaint about Never End in particular. But while the novel is no laugh fest, there is relief in terms of the personalities of the characters, and the somber quality of the story is an interesting aspect of the newly developing Scandinavian noir--in the case of Never End, the darkness is maintained even in the long days of the Swedish summer.
Posted by Glenn Harper at 3:20 PM