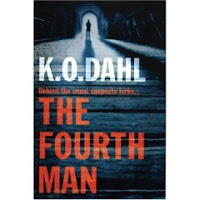 A blurb on the back 0f the newly translated The Fourth Man, by K.O. Dahl, compares the novel to the classic noir of James M. Cain. The comparison is apt, especially since Dahl's book is basically a love story, as many of Cain's were (Dahl's novel also has something in common with the movie Body Heat, which is in its turn a take on Cain's work. I don't know how many of Dahl's books there are featuring his dyspeptic duo of Oslo detectives, Frølich and Gunnarstrand, but this one is focused on Frank Frølich, the younger of the two. Dahl takes a logical tack in turning the format of the police procedural in a noir direction: he makes his detective an outsider by showing him in disgrace or disrepute in any case. Jo Nesbo takes another tack with his detective, Harry Hole, by making him an alcoholic mess. Frølich may in fact be better company than Hole, though I'm still a big fan of Nesbo's work. Dahl's novel is also more compact than Nesbo's, which are on the massive side. Dahl takes several other elements of the genre (besides the Cain-ian love story and the cop-outsider), including a twisty plot and a cynical attitude toward wealth and property. It's a fast-moving plot told in a much more metaphorical and adjective rich style (not for Dahl the famous advice of Colette to the young Simenon: "cut out all the adjectives"). It's engaging and well written, and a more classic version of noir than most of the current Scandinavian novels.
Posted by Glenn Harper at 5:50 PM

Thanks, I am looking forward to this one. I quite liked Nesbo (Redbreast) but not as much as I thought I might do based on my other experiences of Scandinavian noir, so perhaps I'll enjoy Dahl more.