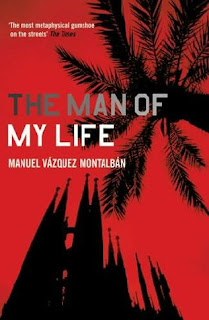 In the couple of years before his death, Manuel Vazquez Montalban brought out one last Pepe Carvalho novel, The Man of My Life. In a novel that circles around several women (a couple of them returned from earlier novels), the author violates the logic of one of Carvalho's most scanadalous habits: burning books. In this last book, the previous novels come back in the form of those two women and in the reminiscences they narrate and provoke. Most of the novel is actually taken up with discussions of Catalan nationalism and post-nationalism, Satanism, Catharism, and so forth. Vazquez Montalban seems to be taking stock not only of his own work but also of the nervous and more or less paranoid currents of the new Europe. One thread of the book does involve a murder that Carvalho is supposed to be investigating, but his cursory search for the killer is frustrated not only by the powers behind the killing but also by the constant distractions that sideline the detective: food, philosophy, love, and memory. None of the Carvalho stories are straightforward--they're about texture and thought and politics, food and sex and violence (usually institutional more than individual). The Man of My Life is the least straightforward, though, and the most thoughtful. This book is essential for anyone who has enjoyed Carvalho's exploits and mannerisms, but not the best place to start on an investigation of this quirky and brilliant Catalan crime writer.
Posted by Glenn Harper at 8:46 AM