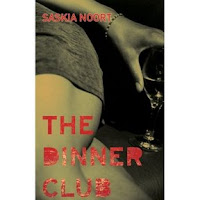 I trust some small presses for their consistently high quality international noir fiction. Bitter Lemon, from the U.K., is one of them (others are Serpent's Tail, Europa Editions, and a few others). So I had no hesitation about buying a copy of Saskia Noort's new crime novel from the Netherlands, The Dinner Club, which has been available for a while in the U.K. The blurb on the back of The Dinner Club compares it to Desperate Housewives combined with Patricia Highsmith. Highsmith is the more apt comparison, since what Noort's circle of friends shares with the Desperates is a suburban setting and lifestyle--but Dinner has none of the cuteness that mars the Desperates. Another comparison noted on the book cover is with Nicci French, the pseudonym of journalists Sean French and Nicci Gerrard. To me, that's not much of a recommendation, and I would probably not have ordered the book without a) the Bitter Lemon imprint and b) the Dutch setting. I've already reviewed or mentioned a few Dutch crime writers or writers who use Dutch settings (Nicholas Freeling, Baantjer, van de Wettering, and Håkan Nesser, whose novels are set in a fictional country that is as much Netherlands as it is Denmark or any other North European country). The Dinner Club is not much like all those: the story develops slowly, and for the first half it seems hardly like a crime novel, more like a suburban-housewife novel of a more general sort, like Maeve Binchy's books, for example. But the menace builds, more slowly perhaps than in a Highsmith book, but just as inexorably. In the end I enjoyed the book (I read it on the intercity train over the past 2 days). The point of view is very controlled, almost claustrophobic, confined to the mind of Karen, the main character. Some of the other central characters are skilfully defined, but others are mere sketches, even some of the essential characters. The plot is carefully constructed and geared for a final surprise revelation (a surprise for Karen, at least, since there is plenty of indication of who the murderous plotter is)--and surprise is not, actually, a Highsmith-ian characteristic. The action sequences in that final surprise are actually a weak point in the book--necessary for the plot but at odds with the atmosphere of the rest of the book. What is happening? Basically, Karen and her husband move out from Amsterdam to a commuter suburb for all the usual reasons, but she becomes frustrated with the unfriendliness of the village natives. She ultimately falls in with a circle of women who are all transplants from the city, but share little else in common. When there are two apparent suicides in this circle and their families, Karen (and a police detective) become suspicious and start to look for conspiracies, to the ridicule of Karen's husband and the rest of the circle, to the extent that she is ultimately ostracized (adding to the paranoid atmosphere). As I said, I enjoyed it without being quite seduced by it. I'd probably read another of Noort's books, for the same reasons I read this one, but it might not be at the top of my list.
Posted by Glenn Harper at 11:46 AM