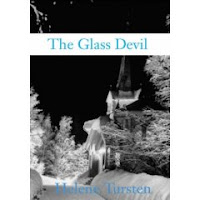 I've read the three crime novels by Helene Tursten that have been translated, all of them police procedurals featuring Inspector Irene Huss of Gothenburg (Göteborg). There are plenty of dark and terrible crimes (in the case of the new The Glass Devil, a brutal triple murder, hints of Satanism, pedophilia, etc) but Inspector Huss herself seems to have no dark side to her character. She's always troubled by the darkness in the killers she confronts, has nightmares about the crimes, but her homelife is untroubled, her relationship with her co-workers mostly no problem. Her fellow detectives are less well developed, but except for some alcoholism and taciturnity, also pretty much untroubled characters. In that sense, Tursten's novels are more like 87th Precinct novels than true noir (also the case with several of the other current crop of Scandinavian crime novels in translation, particularly the series by Åke Edwardson and perhaps also the one by Liza Marklund). I've enjoyed the books, but they have a sunnier quality than some of my favorites among the new Scandinavians, such as Jo Nesbo. In the new novel, Inspector Huss interviews the co-workers of a murdered parson and his family, tries to get an interview with the sole surviving member of the family (a daughter who has moved to London), runs down leads based on Satanic symbols left at the scenes of the crimes, and generally follows police procedure down lots of blind alleys without finding any motives and few clues. If you like procedurals, all of that is fine. My biggest problem with the book is one inconsistency in the plot: One of the few pieces of physical evidence that the police find is planted by the murderer to put them on a false trail--but just as the police follow that false trail, the killer gives himself up saying that they're getting too close to the truth. But the form of the confession is unique and there are still a couple of surprises (one interesting and one a bit cute) still to come after that dénouement. So I have a few quibbles but it was still an enjoyable read and I'll be watching for more of this series. I still have a few more new Swedes to get through, including K.O. Dahl's first and the newest one by Marklund (plus a couple of Irish crime novels and the new Vicki Hendricks)--lots to look forward to!
Posted by Glenn Harper at 3:57 PM

Thanks, Glen: looking forward to reading this one.