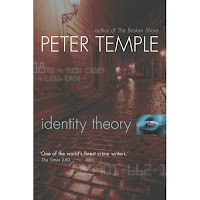 Identity Theory (or In the Evil Day) is Peter Temple's international thriller, a quite different book from his police novels (like The Broken Shore) or his gambler-lawyer-detective series (beginning with Bad Debts). Identity Theory (to use the U.S. title) has little to do with Australia, being mostly set in Germany. The plot is basically a double strand, one following a South African bodyguard (whose client is killed, leaving behind a videotape and documents) and an American emigre and former journalist who is now working for a very contemporary company that mines information for clients from spurned husbands to dodgy corporations. The American's past (he was kidnapped by terrorists in Lebanon) and the South African's documents create a web-like story that is only revealed slowly, in snippets that for a very long time don't make much straightforward sense. The information gathering of the American's employer is the model for the splintered narrative, in a sense: the reader has to put things together along the way. Both the main characters escape shadowy murderers and fine unlikely lovers, and both (along with the novel's dialogue and violence) are believable and compelling. And the pursuit of information is a very contemporary take on the LeCarre spy novel, on the one hand, and the political thriller, on the other. Paranoia (confirmed by the story's resolution) replaces a more elemental social pessimism that is evident in Temple's noir novels (particularly The Broken Shore, with its meditations on racism and economic depression in rural towns). Depending on your taste, you will like Identity Theory or The Broken Shore--the thriller and the crime novel seem to appeal to different readers. Both sides of Temple's oeuvre are effective, though from my personal perspective, the crime fiction side of his career is depper and more effective (though his take on the thriller is at the very least interesting).
Posted by Glenn Harper at 3:27 PM

Glad you liked this. I thought it was fab, though to be honest I did not follow all the ins and outs of the computer bits of the plot, though. I became absorbed in the characterisations -- I really cared about the main characters, who were all coming from such different places. A very skilled author.