The Sinner, by Petra Hammesfahr 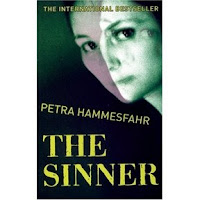 Petra Hammesfahr's The Sinner, recently published in English translation by Bitter Lemon Press, reminds me of a couple of other German-language writers, Ingrid Noll (consistently described as "Germany's queen of crime," and Elfriede Jelinek, the Austrian writer who won the Nobel Prize for Literature in 2004. Jelinek's perverse family dramas have the extreme exaggeration of satire, and Noll's novels combine perversity, murder, and ordinary family life. Likewise, Hammesfahr's novel begins with a woman on the verge of a nervous breakdown. Cora Bender's clod of a husband (he resenbles some of Jelinek's male characters in that respect) wants sex every Friday and Saturday night, but Cora, who previously submitted willingly, has suddenly begun to dread the episodes. Her life falling apart, she plans an elaborate suicide, but just on the verge of that act, everything changes. A murder launches Cora (and we the readers) into a long, circuitous trip through her miserable childhood and the false front of her current life. And throughout her repeated interrogations, especially those with local police chief Rudi Grovian, Cora tells elaborate lies to cover up her motives and the truths that even she is not quite able to grasp. Those lies, and the long road that Grovian takes to discover what's really going on (against his own interests and against the advice of his colleagues) are the texture of the novel, and that texture is what sets The Sinner apart from the novels of Noll (whose sordid tales are more straightforward) or Jelinek (who is never much concerned with three-dimensional characters). The lies, of course, betray one of the characteristic motifs of modern fiction, the unreliable narrator (and Cora indeed narrates part of her tale). Cora is a spectacularly unreliable narrator, not honest even with herself (unable, in fact, to be honest with herself). Her family's poisonous history and ultimately both salacious and tragic outcome are revealed slowly and indirectly, the reader never sure what's a lie and what is narrative truth. The effect is startling and involving, though there are to me some false notes. For one thing, Cora's sister, a key actor in the family drama, is at first barely human, reduced to a lump of birth defects--but suddenly she's talking (and talking trash), a shift that Hammesfahr does explain, and one shift among many in this very indirect narrative, but a better sense of the infants development would have added some realism to that section of the story. Plus there are a number of coincidences that are ultimately drawn together into a coherent story, but strain credulity along the way (and to achieve full impact, the reader needs, indeed to strain for some sort of credible story amid all the misdirection). The Sinner is an unusual kind of crime novel, in which the "sin," if you will, that we think we know about becomes something quite different. Perhaps this is a book for fans of Patricia Highsmith or Stephen King (comparisons made by the publisher) more than those of the kind of noir or police procedural we are more familiar with under the heading of "crime fiction," though Hammesfahr has achieved something more complex than either of those writers, in terms of the manner of the telling and the circuitous life story of her main characters.
Posted by Glenn Harper at 2:24 PM

Great review. Did you read Fiona's review on Euro Crime last week? Although I don't usually like "why" books, this one sounds like a must-read.

I also owe you thanks -- I read these books by Ingrid Noll years ago (very much pre-blogging) but could not remember the author's name. I've been hoping for ages that I would stumble across it again, and now I have. So thanks. I loved those books, so eccentric yet disciplined.