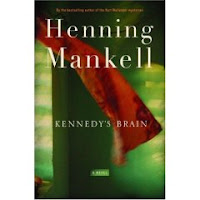 Paranoid novels share with satire or parody the ability to infect reality. If you see a very good parody or lampoon of a politician or a celebrity, it's difficult to take that person seriously again. In Thomas Pynchon's great early paranoid novels, V. and The Crying of Lot 49, the author stitches the reader into the conspiracy with threads of recognizable reality. Henning Mankell's Walander novels frequently turn on a global conspiracy of one sort or another (from murdering Mandela to provide an excuse to reimpose apartheid to bringing down the banking system through the software controlling the global network of ATMs). But Kennedy's Brain, his most paranoiac novel, fails to deliver its intended punch--perhaps because, as he states himself, the novel is motivated by anger. There are certainly great possibilities in a story about the drug industry and AIDS, but Le Carre's novel about the drug industry is much more affecting, for all its misdirection, than Mankell's more straightforwardly told tale. Le Carre, in The Constant Gardener, plants hints, often visual images, that gradually build into a convincing indictment of big Pharma. Mankell follows Louise, his archaeologist and mother, as she tries to piece together the logic of the death of her son, through his papers on the Kennedy assassination and hints dropped throughout her investigation of a secret life that her son concealed from her. Through his hideaway in Barcelona, his father's hideaway in Australia (the men in this novel are always running away or engaging in malicious exploitation of the Third World), and ultimately an AIDS mission in Mozambique. I won't provide any spoilers about what she finds, or how the novel reaches a conclusion of sorts--but the paranoia and despair that she goes through lead to a kind of pessimistic activism, perhaps where Mankell intends to leave the reader. But the text is undramatic, even through the many disappearances and murders. The text is repetitive and tendentious, and Mankell's strategy of repeatedly having his character reach dead ends prevents the reader from being stitched into the story in the manner I describe as Pynchon's. The sentiments of Kennedy's Brain are inarguable, and the author is to be commended for his uncompromising portrayal of an African point of view, as well as African misery (the most affecting character is Lucinda, the African prostitute that becomes Louise's primary contact with her son's past. But Louise herself never quite ingratiates herself into the reader's attention, and few of the murders give rise to much horror or sympathy (though there's plenty of horror in the AIDS mission. Mankell's less angry, less tendentious novels are much more dramatic and involving.
Posted by Glenn Harper at 5:48 PM