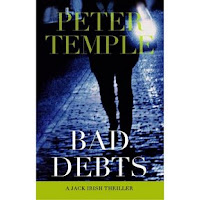 The first of Peter Temple's Jack Irish books, Bad Debts, is quite different from his better known Broken Shore. Like another Australian, Garry Disher, Temple is quite prolific and, also like Disher, he shows considerable diversity among the different strands of his writing. Disher's police-procedural series is, like Temple's Broken Shore, complex, socially conscious, and complex. Whereas Disher's noir series focused on a professional thief is straightforward or linear in comparison, Temple's Jack Irish series is complex in a different way from his Broken Shore: There's a lot of plot, for one thing. Bad Debts combines Irish's avocations (woodworking and gambling) with his day job (as an attorney whose law license is a cover for what is essentially detective work somewhere between McDonald's Archer books and Parker's Spenser novels. But Temple also includes grand property scams à la Chinatown, a child abuse ring à la so many novels and movies that it's impossible to pick just one comparison, and a horse-racing scam that reminds me of John Hawkes's remarkable The Lime Twig (if you haven't read that, it's a treat--as long as you don't mind language that's always moving sideways and a plot that moves forward more by mood than narrative--among literary novels of crime, The Lime Twig is one of the best). Amid all that plot, Temple adds some flourishes to the more predictable plot twists--a character that any habitual crime-novel reader would expect to end up dead doesn't, though many others do. And a plot point that is so obvious that the reader will be screaming at Irish to go back and figure it out turns out in an unexpected way (I could almost see a little malicious grin on the author's face when he turned my expectation into something else). While more conventional than The Broken Shore, Bad Debts nevertheless draws the reader in to each of its several strands, inluding the extremely complex racing scam, the machinations of which could only be clear to someone who spends way too much time at the track. And the Australian setting (physical, social, and political) is drawn vividly. I'm looking for the rest of the Jack Irish books, as well as Temple's other non-series books.
Posted by Glenn Harper at 6:35 AM

Probably not noirish though