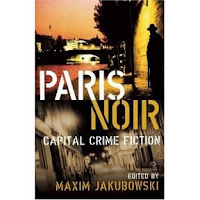 Maxim Jakubowski's collection, Paris Noir, suffers a bit in comparison with Crimini, the anthology of Italian crime fiction recently reviewed here. Paris Noir's stories are shorter than those in Crimini, as well as slighter. Whereas a number of the tales in Crimini are long and complex, most of those in Paris Noir are short, slice of life or perhaps glimpse of misery tales. And while Jakubowsky's ten-year-old London Noir (perhaps the founding volume of the recently burgeoning collections of city noir stories) was an exploration of (then) new British crime writing, Paris Noir is mostly Anglo-American writing by established writers like John Harvey (also in London Noir), Sparkle Hayter, Stella Duffy, Jerome Charyn, Scott Phillips, and Cara Black (all of whom have Paris credentials and the last in the list having a running series based in Paris). Some of the best of the stories are, indeed, by French authors, most of whom are not known in the U.S., and the best of them is by the estimable Dominique Manotti. Manotti's tale is terse and oblique, coming around to its point only in the last sentences, revealing a dark side of Paris's life and politics (I only wish it were longer and more fully realized, since I'm a big fan and impatiently awaiting her forthcoming Lorraine Connection). Romain Slocombe tells a tense serial killer tale from a threatened woman's point of view (though the actual crime in the story is not what's expected). Dominique Sylvain's Heat Wave weaves contemporary events in French culture and history with wonderful wordplay that is in a way the subject of the story--the crime is almost incidental to the reader's experience; this tale of interplay between a cop and his new partner (and between the cop and his desire for his psychoanalyst) is perhaps the most satisfyingly complete (in an aesthetic sense) of the stories. Actually, the incidental quality of the crime is fairly common in this collection. John Williams, author of a couple of enjoyable and informative books on American noir fiction as well as several novels and a story collection that stake out his own territory in crime fiction (a melancholy exploration of the subculture of musicians) contributes a circular story of male sexuality in its bohemian variant. John Harvey's tale, also from the musical underworld, follows the decline of its hero into addiction, surely a tale of criminal waste of promise, but without the usual framing devices of noir. The only long story in the collection is by Michael Moorcock, who is known more for literary fantasy than crime fiction, and his story here is a metafictional, comic farrago, a grand guignol of direct and indirect references to the literature of crime, the geography of Paris, and alternative history. The story is entertaining and clever, but doesn't really have the tension or intensity that one might expect from noir. Barry Gifford's Nadja is a retelling, in the mode of parody or travesty, of Surrealism maven Andre Breton's famous novel of the same name--fun and even chilling, but not a crime story, really. Nocturne le Jeudi, by Scott Phillips, is an elegantly written slice of life that takes an ordinary-life approach, giving an existential twist to crime fiction by focusing on his central character's guilty glimpse of a possible crime rather than on the crime itself. Sparkle Hayter's Deus ex Machina, on the other hand, exploits the conventions of the crime story and the new realities of Paris in a roller coaster from suicide to murder to resolution that is quite simply a lot of fun to read. Stella Duffy's contribution is an affecting monologue that reveals the narrator's secrets and the story slowly and subtly, amplifying the emotional impact of the crime when it is finally made clear. Duffy's and Hayter's very different stories would make Paris Noir worth the price of admission, and a few of the others (Manotti's and Phillips's in particular) are up to that standard. If not quite as substantial a collection as Crimini, Paris Noir is still an interesting and diverse snapshot of noir writing touching on the city of lights.
Posted by Glenn Harper at 2:25 PM

It's interesting that all the stories seem to have some substantial connection to Paris. That's not always the case with the recent city noir collections. I remember thinking highly of several of the stories in Dublin Noir, for example, but not always being sure what they had to do with Dublin or Ireland.
===================
Detectives Beyond Borders
"Because Murder Is More Fun Away From Home"
http://detectivesbeyondborders.blogspot.com/