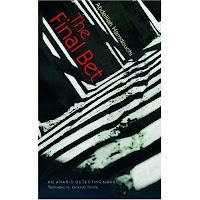 Billed as the first Arabic-language procedural to be translated into English, Abdelilah Hamdouchi's The Final Bet is a crime novel of the new Morocco. There's a temptation to compare The Final Bet to the crime novels of Yasmina Khadra, which (though written in French) were the first Arabic police procedurals to arrive in the U.S. But Khadra's novels follow a policeman trying to cope in an Algeria that is falling into chaos in the face of fundamentalist challenges to the government. Hamdouchi's policeman is coping with the collapse of the Moroccan era of repression and police brutality known as the Years of Lead, meaning that the cop can no longer simply beat confessions out of a suspect. In addition, the real detective in this novel only emerges toward the end, in the person of an attorney who manages to solve the crime and save his client (in an almost Perry Mason-ish fashion). But rather than Khadra or Perry Mason, the most accurate comparison is, I think, with Leonardo Sciascia, whose lucid, short crime novels were a means of investigating Sicilian and Italian injustices. Hamdouchi's book is similarly clearly written, short, and straightforward, lacking only Sciascia's ironies. And Hamdouchi is seeking not only to delineate social injustice but to propose a solution, the right of the accused to be represented by counsel during police questioning. The plot follows the case of a young Moroccan man, Othman, married to a much older French woman. Othman is unfaithful and is the sole beneficiary of his wife's estate, so when he discovers her stabbed to death, he's the logical suspect, the person who stands to gain most from his wife's death (a death that, in fact, he'd been yearning for). Stated directly, the plot does suggest Perry Mason, again. But when Othman contacts a former classmate and legal reformer, the mystery becomes linked to the larger social issues. The message, though, doesn't overwhelm the story: it's only emphasized in the last chapter and in an Afterword by the translator (Jonathan Smolin), who gives the political background to the story. As a novel, The Final Bet is a quick and enjoyable read, a bit lighter than Sciascia or Khadra and perhaps a bit more hopeful about the positive resolution of the larger social ills addressed--as well as being more mystery than noir, for the most part. Sciascia's aforementioned irony and Khadra's pessimism arise from the skepticism and despair in the face of intractable problems larger than the immediate story at hand. Hamdouchi's book is a welcome glimpse into the Moroccan milieu and its criminal justice system, and as a bonus, the dustcover design is more striking than the average crime novel (and is even carried over into the design of the hardcover underneath). Plus there's a creeping sense of noir darkness in the implications of the Moroccan past showing through the cracks in the current climate of reform.
Posted by Glenn Harper at 6:45 PM

I like your suggestion that Hamdouchi seeks to provide a solution. Matt Rees, who has written two novels set in the Palestinian territories, recounts an interview he did with an Arabic newspaper, I believe in the territories, in which the interviewer had to explain to the readers in the most basic terms what a detective does: He gathers evidence, tries to determine the facts and solve the case, and so on.

I wonder if Hamdouchi's seeking solutions will surprise readers in Morocco.
==============
Detectives Beyond Borders
"Because Murder Is More Fun Away From Home"
http://www.detectivesbeyondborders.blogspot.com/