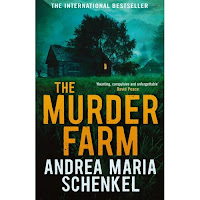 I have a question for those familiar with the range of German crime fiction. It seems to me that crime fiction in German is more likely to be in the category of psychological thriller than police procedural or detective story (the prominent exceptions that I know of are the excellent detective novels of Jakob Arjouni and the single cop story thus far translated by Pieke Bierman). The recently released translation of Andrea Maria Schenkel's The Murder Farm is both an illustration and an exception to the psycho-thriller sort of thing that I'm referring to. I've also discussed a number of other German thrillers in earlier posts. Schenkel's is different from the others in its transformations of what in the U.S. would be called "Southern Gothic," basically the straitened lives and exaggerated relationships of rural people, and the folk tale tradition that in English is mis-named "fairy tales" (I think in German they're called "Märchen"--correct me if I'm wrong). The Murder Farm has the inevitability and spookiness of Märchen from folk tales through the Grimms. It's told in short chapters that alternate between witness testimony and third-person interior monologues from the point of view of various witnesses or bystanders to the murder of a whole family on a remote farm (after a first chapter from the point of view of an unnamed former resident of the nearby town who is returning to find out what happened, when the police failed to resolve the matter--the witness testimony that follows is presumably collected by him, and perhaps the narratives are surmised by him, but the source is vague). The jigsaw-puzzle effect is very suitable to the horrible crime and the Gothic setting, and the testimony chapters are just long enough (longer and the narrow points of view of some of the speakers might have gotten tedious--at the length Schenkel gives them, their fascinating). What emerges is a not-very-optimistic view of human nature in general and of the post-war era in particular (the events occur 10 years after WWII). Not as dark as, say, The Painted Bird, but reaching toward a view of evil as an inherent possibility in human life and society (even in small groups). The flyleaf blurb says that the ending is "shattering," a somewhat inflated pitch for the resolution of the plot: I'd say "convincing," in laying the blame on the individual responsible, but in a tone similar to that of the novel as a whole rather than reaching a new emotional pitch. So: you readers of German crime, let us know: is The Murder Farm (or Petra Hammesfahr or Ingrid Noll) more typical of German crime fiction than Arjouni or Bierman?
Posted by Glenn Harper at 8:42 AM

Interesting post. I've read this book, and Ingrid Noll (several) so probably cannot extrapolate to being knowledgeable about German crime fic. I did like Jan Costin Wagner who is German but who set his first novel in Finland. Altough there were some Germans in it, and observations on the Finland-Germany relations.

I have set up a FriendFeed account for crime/mystery readers here:
http://friendfeed.com/rooms/crime-and-mystery-fiction

I like the user interface, and think it a pretty good place to ask questions such as yours here. I hope you'll check it out and join. (Early days yet, I only set it up today.)

German crime fiction mostly psychological thrillers? No, not really. Appearances are deceptive. Schenkel is definitely not a stereotype of crime fiction in Germany. That's exactly the reason why she was award with the Deutscher Krimi Preis (an award of German critics) twice in a row, The Murder Farm being the first in the row. Her novels are extraordinary, although there are not just a few readers who cannot do anything with her books.

Anyway, if you really look for a stereotype or a cliche, have a look on TV: Tatort, Derrick - that's the way, most of the German crime novels go. Of course, there are (good) exceptions. Schenkel is one of them.

Maxine and Lars: Thanks for the responses and the friendfeed link. Lars, the Tatort show is a good example, I should have thought of that--its popularity is surely a sign of the larger crime field. We can only get the Köln version of Tatort here, and our local station is probably the only one in the U.S. that carries even that. I'd love to see some of the other versions of the series--maybe some will show up as DVDs. I did see the crossover between the Köln crew and the Leipzig version, which was pretty good, but still, it's frustrating to know there's much more (not to mention Derrick, which we don't have access to at all). I can understand that Schenkel would not be to everyone's taste, and glad to know a bit more about the field as a whole in Germany.
Thanks again,
Glenn

didn't really expect that 'Tatort' is telecasted in the US, nice surprise. The Cologne 'Tatort' with Schenk and Ballauf is one of my favorites. From my point of view, your station really has chosen one of the best.

Maybe you like to take a look at this site.

This is the inspector Schimanski 'Tatort' series from the 80s based in the Ruhr area. It was recently awarded by the readers of Germany's tabloid paper 'Bild' as the best 'Tatort' series ever. Kind of hardboiled in contrast to the most current ones.