The other Carlo Lucarelli 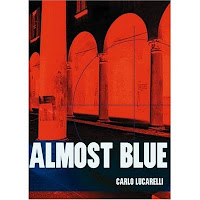 I'm taking a break from reading the new Michele Giuttari novel, A Death in Tuscany, to dip back into the first series by Carlo Lucarelli to find its way into English, in the exceptional translations by Oonagh Stransky. Lucarelli's series set at the end of World War II has been much praised recently, occasioned by the completion this year of the Commissario De Luca trilogy in translation (from Europa editions)--and that new attention made me wonder how the series featuring Ispettore Grazia Negro in contemporary Bologna would fare in comparison. Rereading Almost Blue, I found that I appreciated its quirkiness more this time around. Quite different from the war trilogy, the story is structured around the experience of a blind character who listens to a radio scanner, on which he can pick up not only police signals but also cell-phone conversations. The novel itself is made up of voices, in narratives from the point of view of Grazia, the deaf man, and the mysterious serial killer, along with voices overheard on the scanner, the voices of the other cops (frequently disrespecting Grazia), and others. Each of the voices is distinct, and the novel, as a result, is a kind of jigsaw puzzle. Two of the voices are striking and surreal: the blind man has a color sense based entirely on sound (he was blind at birth and has no sense of what sight is like), and the killer shifts in and out of hallucinatory visions concerned with the possession of his body by monsters. The resolution of the threat that the killer poses to the public, to Grazia, and to the blind-listener derives from the interior, hallucinatory reality of the killer rather than from a deus-ex-machina rescue (which is the rather disappointing resolution of the plot of Day after Day, the second Grazia Negro novel). Lucarelli's style is totally different here: showier and more concerned with description of setting. The characters are also "brighter," compared to the more subdued characterizations and dialogues of the De Luca books (the more drab quality suits the war and post-war years of the De Luca books, and the almost televised quality of the Grazia Negro books suits today). One thing about rereading a 10-year-old novel, though, especially one that wore its technology on its sleeve as Almost Blue does)--life is changing very fast, making large chunks of the narrative seem dated (almost historical): noisy modems, e-mail downloaded from Eudora, and that radio scanner's access to e-mail (though Grazia notes that the GSM phones already in circulation in Italy at that time were immune to the scanners). But for a glimpse at the literary dexterity of Lucarelli in a couple of his various incarnations (he also hosts a sort of "Italy's Most Wanted" TV show, among other careers), Almost Blue offers a dazzlingly different experience from the De Luca books (and taken together, Almost Blue and Day after Day offer a vivid reading experience not unlike watching contemporary European crime films); if a bit less complex in their social and political portrait of a society, they portray Bologna more fully than most of the few other examples we have in crime fiction (such as Night Bus, which zips through Bologna too rapidly to give much detail or Aurelio Zen's visit to the city, which is fun but superficial).
Posted by Glenn Harper at 1:17 PM