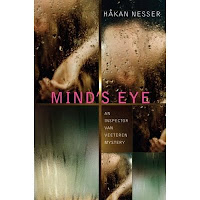 Yet again, we have reason to regret the translation of excellent crime series out of order. Laurie Thompson's excellent translations of 2 later novels in Swedish writer Håkan Nesser's series featuring Chief Inspector Van Veeteren appeared before Mind's Eye (literal translation of the title would be more like The Wide-Meshed Net), the first in the series. I for one wish I could go back and start the series anew with Mind's Eye--starting with the first book gives a better sense of who Van Veeteren is, a better exposure to Nesser's wry sense of humor, a better introduction to the locale (Nesser's novels are set not in Sweden but in an imaginary North-European country that is a composite of the Scandinavian countries, Holland, etc.)and what would be for me a better introduction to the series. Mind's Eye bears comparison to the police-procedural tradition of Maj Sjöwall/Per Wahlöö, even more so than other current Swedish crime series--the sometimes cranky relations among the policemen, the indirect routes to the discovery of the perpetrator, and the social basis of the criminal situation all relate positively to Sjöwall/Wahlöö more so than the more recent 2 Nesser novels that have been translated (which deserve positive comparison to the likes of Friedrich Glauser not to mention Janwillem Van de Wettering--Nesser's detective is apparently named in homage to the Dutch crime writer. In terms of the setting, this first introduction to Nesser's unnamed country fills in some of the background and raises an interesting comparison to that other great fictional setting, Ed McBain's 87th Precinct. Nesser stakes out a whole country, rather than an island metropolis, but it's a less urban and more diverse setting, giving Nesser more leeway in creating landscapes, but also calling for a very different approach (larger distances, different terrains rather than theater districts and tenements). With other series published out of order, it's a plot that bridges novels that gets garbled (as in Jo Nesbø's books) or back story not explained (as in the Petra Delicado series recently discussed here, or in the case of Manuel Vazquez Montalban's early Pepe Carvalho novels are only now becoming available in English) or references to earlier crimes that the reader won't "get" (in numerous cases). With Nesser's books it's more a matter of perceiving the territory within crime fiction that the author is staking out, including the precurser's that I've mentioned as well as introductions to character quirks and ongoing motifs (like the badminton matches running through Nesser's series). (I should mention that one writer, Liza Marklund, actually wrote her series out of order, beginning to lay out her character's back story with the second Annika Bentzon and continuing to fill in until her story caught up with that first novel, The Bomber.) We now have a fuller sense of what Nesser is doing, and a fuller appreciation of what he has accomplished: the Van Veeteren series is one of the cleverest and most enjoyable of the Scandinavian crime wave, and my earlier cavilling about his novels being "placeless" because of the invented setting is hereby withdrawn: with Mind's Eye, I'm convinced.
Posted by Glenn Harper at 5:45 PM