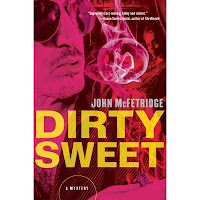 I was impressed with Declan Burke's endorsement of the novels of John McFetridge (at Crime Always Pays) and went looking for the 2 already published. I'm happy to report that on the basis of the first book, Dirty Sweet, I'm as enthusiastic as Declan. The comparison with Elmore Leonard is irresistible (even to Elmore Leonard, apparently): McFetridge shares with that master of the form a couple of characteristics: One is voice, the characters speak in language that seems less written than overheard. Another is that the plot seems to grow out of the characters, rather than characters being in service of (even trapped in) a plot, as is the case with some crime novels. Dirty Sweet is a novel of voices, multiple voices. Rather than a narrator telling a story, the characters seem to be telling each other the story (as much as they're telling it to us). Though the multiple characters do seem to be heading toward a climactic convergence, it's not a "climax" in the sense of a tightening web, it's an inevitable meeting of people whose interests focus on something they all want. The story itself is pure noir and very Canadian--the latter in a couple of ways. I don't know of any other country where the biker gangs have become the crime lords. The first time I read a Canadian crime novel featuring mafia-bikers, I couldn't believe it was based on reality, but then looked into the situation a bit, and indeed, the bikers have controlled crime in Canadian cities for quite a while. There's also a sense of Canadian identity, in the characters' discussions of Canadian-ness and Canada's successful products in world pop culture (movie-making, music, etc.), as well as the unavoidable topic of the behemoth on the border just to the south. It's more than just local color that I'm talking about: Dirty Sweet is a Canadian novel (and in particular a Toronto story) in the same way that "tartan noir" is a definable approach to crime fiction, for example. In other words, McFetridge isn't turning out pseudo-American crime fiction any more than he's imitating Elmore Leonard: his voice is original, lively, and addictive. The plot involves a woman who leases office space but happens to witness a murder (a Russian mob hit in bright daylight at a traffic light), the Russian mobsters who did the hit, an internet-porn businessman who happens to be the leasing agent's client, the Toronto homicide cops looking into the hit, plus the bikers trying to horn in on the Russians' business, the naked and nearly naked internet porn performers sitting around talking about their kids' TV viewing, a couple of Mounties, and more: all of the above with parts to play in the story, and all with his or her own voice and point of view. Watching (or, really, hearing) all of the above come together is a treat. I can only imagine that this would be a very difficult book to translate into an audio version, because there are so many voices, with such subtle distinctions among them, that a reader would/will need a lot of talent in portraying them individually as well as McFetridge has done on the printed page.
Posted by Glenn Harper at 7:27 AM

Canada does a good job of projecting a nicer than nice image, but in doing so many have turned a blind eye to the serious problems with biker gangs. John has both nailed it on the head and incorporated references to real incidents, ripped from the headlines, that add to the caliber of storytelling.

He's the real deal, alright, Glenn - if you liked Dirty Sweet, you'll love Everybody Knows. And Go Round takes it on to another level again ... Cheers, Dec

Mr. Harper-Would you be willing to write about a book you deem "forgotten" for my blog project on such: http://pattinase.blogspot. com
I am looking for entries for late summer/early autumn. My email is aa2579@wayn.edu
Thanks. Patti Abbptt