Comments on The Girl Who Played with Fire, by Stieg Larsson 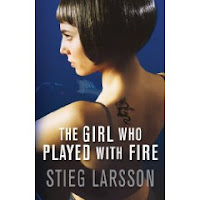 So much has already been written in the blogosphere about The Girl Who Played with Fire, volume two in Stieg Larsson's Millennium Trilogy, that I don't need to go into a lot of detail. But I do have a few comments. It's a book that doesn't get going, really, until around page 200, and it's repetitive and overstuffed. But it's still compelling and I began to wonder why, what the secrets of its appeal are. It has been extensively noted that the lead character, Lisbeth Salander, is fascinating and unique--but there's actually a good bit of common ground with other characters in fiction and fantasy (Carol O'Connell's Mallory is an example from crime fiction, and then there's Tank Girl, and Hellboy's Liz Sherman. That drift into fantasy and comics suggests one of the points I'm heading toward. But first, how does the bagginess of the novel relate to its popularity: Larsson is engaging in what has been called the "reality effect," piling on detail and repetition that seems irrelevant or not directly relevant to the story, but detail that gives a sense of a complete world that the reader has entered into--so complete that one almost has a sense of peripheral vision, detail beyond what our eye is picking up directly in the narrative. By the time we get to some plot elements that are actually pretty hard to swallow, we're already committed to the naturalism that Larsson has embedded us within. What Larsson is doing, I think, is using a crime fiction structure to bring an old-fashioned adventure tale into the realm of ordinary modern, urban life (the world reinforced by the reality effect). The structure of The Girl Who Played with Fire (even more than is the case with The Girl with the Dragon Tattoo, a title that might have been more accurately translated as Men Who Hate Women) is at its basic level that of an Alexandre Dumas story (with elements of The Count of Monte Cristo and Les Misérables--and even The Man in the Iron Mask), with some aspects of George Sand's more melodramatic novels as well as Sand's sexual politics. But the adventure is updated into the realm of journalism, research, police procedure, hacking, etc., rather than swordplay and dungeons (though there's some of that, at least in its modern version, as well)--plus there's even some romance, of a sort. Salander's black-and-white morality as well as the plainly evil nature of a good portion of the cast of characters is also reminiscent of Dumas and the adventure story. Larsson goes further, though, into fantasy and superhero comics and even Star Wars (I won't give that element away, but trust me, there's a distinctly Star Wars turn to the plot). Though I am not really susceptible to the appeal of fantasy and superheroes, I am, in fact, susceptible to the appeals of the old-fashioned adventure tale, as I suspect are a lot of people who like or don't like fantasy and comics. Larsson gives all of us something: a naturalistic crime story with fantasy elements, a morality-and-adventure story that's entirely contemporary, without (almost) any superpowers, and totally without metaphysics or theology. It's our world, but with swashbuckling (of a very contemporary sort) and even cliffhangers. I mentioned Mallory before, and O'Connell's novels do have something of the fantasy world about them, but in a more straightforward noir format. In my experience, the broader canvas and the nod to 19th-century adventure in particular are unique to Larsson. I assume that the epic winds its way through a different set of events in volume 3, before reaching some sort of resolution--but unless I start practicing my Swedish I'll have to wait until next year to find out (and it would probably take longer than that for me to get my Swedish reading skills up to the task).
Posted by Glenn Harper at 8:08 PM

Very insightful, and I am with you on quite a bit of this - for example the "rich microcosm" is a point you put extremely well. I mentioned in my own review the "comic book" element, so interesting that you concur. I loved the sense of adventure, too.

I have not read any Sand I am ashamed to say, and the Dumas I read was too long ago to recall sufficiently for a comparison. I am quite surprised not to have read more comparisons with J K Rowling, though. Star Wars --- hmm! I can think of one element, but I think I may have missed others!

Certainly this book was an incredibly exciting read - I am glad I read it over the Christmas break where I could start at the beginning and not stop until the end. I see that the next one is due out in the UK in the autumn, according to the Quercus website - which at least is better than the previous intention of Jan 09.